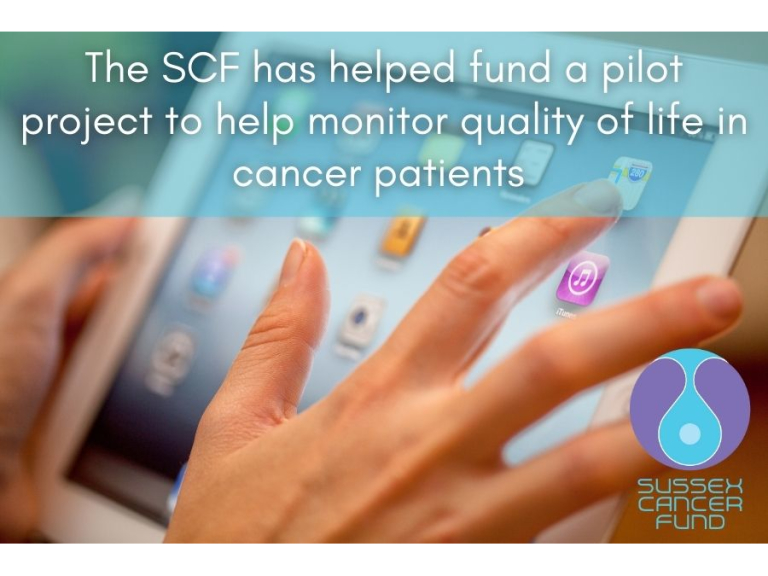 The Sussex Cancer Fund has been supporting a research project known as the ‘Trigger’ Project which is a ground-breaking collaboration between Imperial College London, the University of Cardiff and the Sussex Cancer Centre. The official title of the project is “Collecting patient-reported outcome measures in patients receiving pelvic radiotherapy”

Cancer incidence rates are predicted to keep rising however with improvements in treatment and care many cancer patients are surviving beyond ten years post-diagnosis, meaning cancer can often be seen as a chronic disease. Along with treatment, it is essential that we also look at the general wellbeing of the patient. Patient-Reported Outcome Measures (PROMs) are tools used to assess patients’ quality of life at various time points before, during and after treatment but these tools are rarely used at present.

The Trigger project aims to electronically capture PROMs in adult patients who have had radical pelvic radiotherapy by using a questionnaire that also includes questions from an existing validated screening tool for bowel symptoms known as ALERT-B.  The screening tool for bowel symptoms uses a questionnaire regarding bowel symptoms at various stages during and after treatment. Depending on the patient answers the system should trigger referral to further gastroenterological assessments should the patient need it or direct the patient to advice sources and support.

The project was started in July 2018 with the initial pilot schemes in 3 cancer centres in the UK. The project has been exploring if suitable software can be designed to collect responses to a nationally recognised toxicity score used following pelvic radiotherapy and also how well patients adapt to the self-reporting system. We are trialling acceptability to patients, and whether patients will register electronically and log on (rather like an online bank account) to report symptoms. Collecting side-effects directly from patients will potentially improve patient experience and lead to more timely interventions to improve symptoms.

Patients complete the questionnaire peri-treatment and post-treatment to capture acute and long-term toxicity in routine clinical practice. The teams are now assessing the feasibility to link PROMs data back to national cancer registries. The project is now in its final year and will finish in the summer 2021 and the pilot schemes’ success will shape the future direction of work and the sharing and understanding of the collated patient data will ultimately lead to better treatment plans.

The fact that the project is collecting patient data as well as recording toxicity as a result of radiotherapy means that it would also be an important way to monitor standards of radiotherapy nationally.

Dr David Bloomfield, Consultant Oncologist said “The Trigger Project is an exciting project using technology to bring together some existing tools and data. The methodology used and the data compiled will ultimately both contribute to improvements to cancer treatments and quality of life in patients.”

The success of the ‘Trigger’ pilot project so far indicates that uptake by patients is sufficient for this to be rolled out on a larger scale. In fact, the project has now formed the basis of additional research projects. Dr Ollie Minton – Consultant in Palliative Care has used the work from the initial ‘Trigger project’ to apply for a grant from NHS England to register patients being treated at the Sussex Cancer Centre on a similar system. Ollie’s project is reporting on symptoms from patients with other types of cancer and linking them to treatment types, in real-time. This will flag upside effects more quickly allowing the modification of treatments to reduce side effects and conversely can map reduction in cancer side effects with effective treatment.

If you would like to help us fund more research projects and help develop better treatments for cancer patients in Sussex please use the button below.