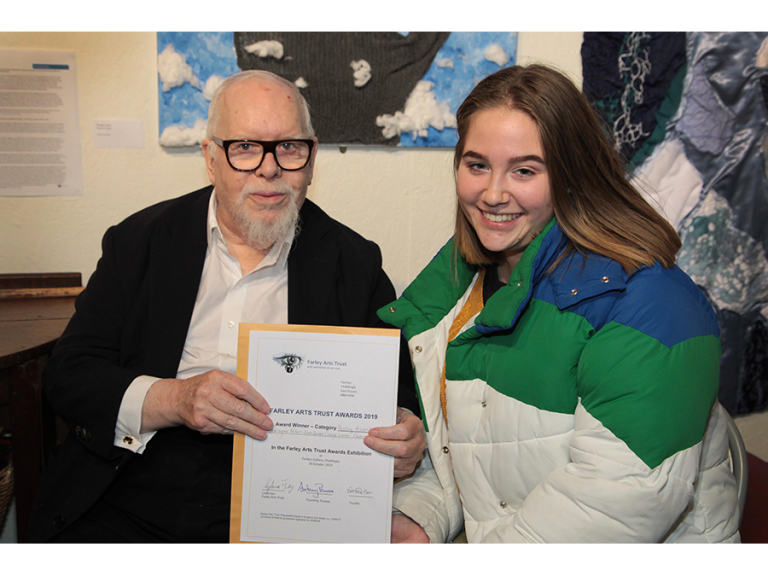 Seven talented young artists from East Sussex College were celebrating at this year’s Farley Arts Trust awards as they won top prizes and commendations for their topical, thought-provoking, and creative artwork.

Students from the college’s three campuses in Eastbourne, Hastings and Lewes, were invited to the awards evening at the Farleys Gallery in Chiddingly on Friday 18th October to receive their awards from special guest, Sir Peter Blake.

From the Lewes campus, Gus Baldwin, won the top sculpture award for his 3D wire snail which illustrates the slow, numb feelings of anxiety and vulnerability. Katarzyna Fedor’s oil painted canvas, which represents the current societal situation regarding immigration and domesticity, won the top prize in the painting category. Shannon Townsend’s book of sketches visually explore the relationship between architecture and atmosphere and was the winner in the sketchbook category.

Three students from the Eastbourne campus were also nominated and won awards. Jessica Miles created a range of prints based on her relationship with synaesthesia and won the top award in the works on paper category. There were highly commended awards for Izzy Patterson, who created swimwear based on micro-cultures in pond life, and Emily Coates, who created an advertising campaign to raise awareness for foodbanks.

Rounding off the night of winners was Isaac Wall, from the Hastings campus, with his humanitarian life jacket.

Michael Shepherd, Art & Design course leader at the Eastbourne campus, said, “What a fantastic night of celebration at the Farley Arts Trust awards. We’re immensely proud of our students winning the top awards and highly commended awards for their art pieces. This will hopefully be just the start of their exciting careers in the creative industries.”

All of the award-winning work will now be curated and exhibited in the Farleys Gallery once it re-opens in April 2020. The gallery opens on Sundays and Thursdays and entry is free.