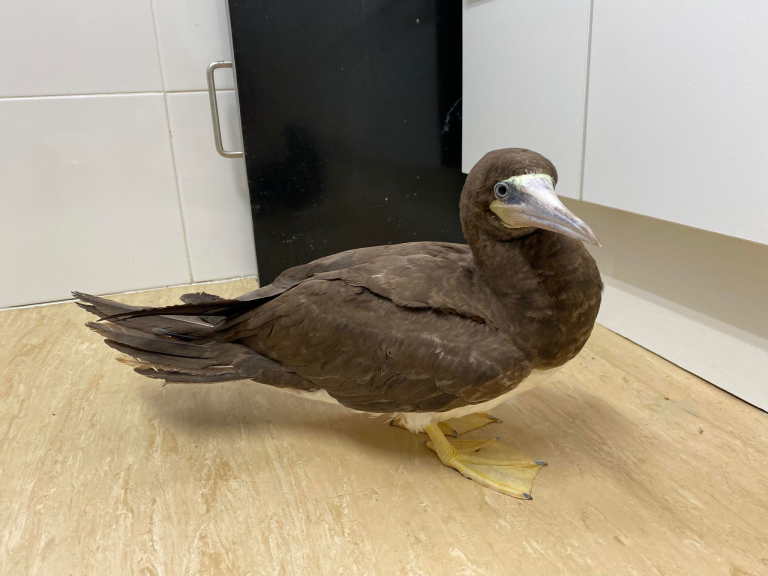 A rare Brown Booby was rescued around midday on Sunday 2nd January from the beach opposite Holland Road Hove, Sussex UK, after being report by members of the public.

Volunteer rescuers Shaz Hawthorn and Lisa Barrow from Brighton & Hove Wildlife Advice & Rescue Service attended on scene and found a member of the public had already caught and boxed the bird. They transferred the bird to one of their containers before delivering it across to the veterinary hospital at East Sussex Wildlife Rescue & Ambulance Service (East Sussex WRAS) near Lewes, East Sussex.

The bird was assessed by the Care Team at East Sussex WRAS and found to be under weight at 760 grams. Their natural body weight is around 1-1.8kg.

“The bird passed faeces of a solid enough state indicating that it had recently eaten but clearly not enough over time.”

This is the second Booby which East Sussex WRAS has had in care. The last one was a Red Footed Booby back in 2016. A Brown Booby was also spotted on the Cornish Coast in 2019.

Trevor Weeks MBE, founder and Operations Director of East Sussex WRAS said “Having one Booby to deal with was a surprise to get a second turn up here in Sussex is really unusual as these birds are found around from the Mediterranean and down onto the African coast as well as around the Gulf of Mexico over a pantropical range.”

The brown booby is the most common and widespread of the Booby species but very unusual here in the UK.

“We don’t know where the bird came from originally nor what route it would have taken but we are aware that these birds have landed on shipping and travelled outside of their natural home range before as well as being blown off course in storms” said Trevor.

East Sussex WRAS veterinary surgeon Lourdes Cortes Saez MRCVS  said “We are being very guarded about the birds chances of survival due to the degree of weight loss.  The bird has a good attitude and being a good patient so we are trying our best to build the bird up. Its very much one step at a time.”

Once the bird is healthy enough, it is likely to be transferred to another specialist rehabilitation centre before potentially being flown back to a more natural location for its release.

East Sussex WRAS is an award winning community veterinary charity which deals with 4-6,000 wildlife casualties every year from across East Sussex and is funded entirely by donations.

FACTS: WEIGHT: Their natural body weight is around 1-1.8kg.

RARENESS: 2nd Booby in Sussex. Red Footed Booby back in 2016. Brown Booby seen Cornwall in 2019. Conservation status “LC” (Least Concern) world wide. This species is the most common and widespread of the Booby family of birds.

HOME RANGE: They have a pan tropical range and various sub species including: Coast of the Southern USA / California, Gulf of Mexico, Caribbean, West African coast, but have been seen up into the Mediterranean sea, Red Sea, Arabian Sea, Singapore / Indonesia, Northern Australia.

GENDER OF THIS BIRD: Unknown.

AGE: Believe to be a juvenile.

POLLUTION: 90% of Brown Booby nests consist of plastic according to a study undertake in 2018 and reported in the Marine Pollution Bulletin.

Eastbourne Guide for Disabled People 2022
Sign up for offers
Sign up for what's on guide
Become an author
Popular Categories
By clicking 'ACCEPT', you agree to the storing of cookies on your device to enhance site navigation, analyse site usage, and assist in our marketing efforts.
For more information on how we use cookies, please see our Cookie Policy.