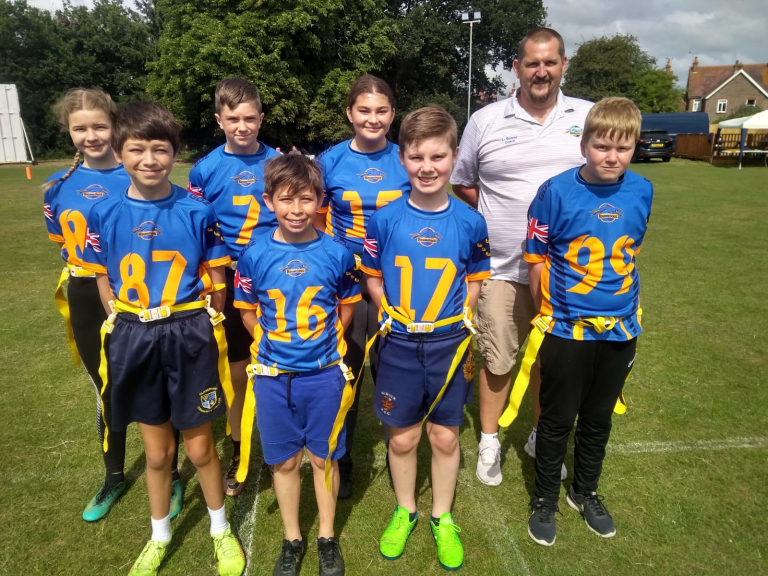 A young HoundDogs team got the chance to see how far their skills has developed over the season with the last run out of the year as the HoundDogs hosted the 1st annual Dog Bowl event at Horsebridge.

The HoundDogs then took on the favourites in Kent Phoenix. The HoundDogs learnt from an early mistake when QB Ben Boorer got picked off for the Phoenix to return the ball and score 0-7. The Phoenix, who had a massive height advantage continued to control the game and extended their lead to 0-14. After learning from their mistakes, the young HoundDogs team decided to run the ball and ditched the passing game. This started to bear fruits as it was Maia Cameron-Dick who got the HoundDogs on the board with a clearly worked double sweep play which saw the HoundDogs come back into the game 7-14, only for Kent Phoenix to score with almost the last play of the game 7-21.

The last game for the HoundDogs saw them face off against Kent Exiles. The HoundDogs though this could be another evenly matched game and neither teams disappointed. It was the Exiles who open the scoring but but the HoundDogs came back thanks to Maia Cameron-Dick again with anotherdetermined run as she marched her team down the field into the Exile’s EndZone 7-7. In a game that ebbed and flowed, the Exiles came back again but for another impressive run from Alfie Woods to even the score up at 14-14. At this point the young HoundDogs team seemed to lose energy as the Exiles ran in another 2 TouchDowns to finish the game winners at 28-14.

HoundDogs Coach, Luke Boorer added “Today has been a real learning curve for all the players. Several of our players have never played in a game before, so I am very proud of all the players. We have some greta talent coming through and we have really expanded over the last few month. This is the 1st time we have managed to put out an U11’s and a U14’s at the same competition, which is fantastic for the club. Today Maia and Alfie really impressed on Offence, but we had some great defence play from Finn Wilson, Clare Townsend, Caven Baker-Sells and the player I call Mr Defence in Adam Taylor. Not only did we get two teams out, but we also had a number of girls in our teams as well as the other club proving it’s not just a sport for boys. We are now coming to the end of season but we will return in September with hopefully a few more recruits and we will go into next year stronger as a team and a club.”

The Luke Boorer Carpets MVP’s are

Offence – Maia Cameron-Dick. This is only Maia’s 2nd tournament and she really excelled on the pitch. She lead the Offence and also played extremely well on Defence to help her teammates out. Watching Maia run the ball is amazing. It’s almost looks as though she floats across the ground with speed.

Defence – Adam Taylor. Adam is a new recruit this season and has really demonstrated a willingness to learn and develop. Adam again made lots of very good stops on D. We just need to get him to be more vocal and start to help lead the Defence on the pitch.

Wednesday the 17th is the last session of the season. However, the HoundDogs return to training on Wednesday the 4th of September at Horsebridge Rec, 6:30PM.