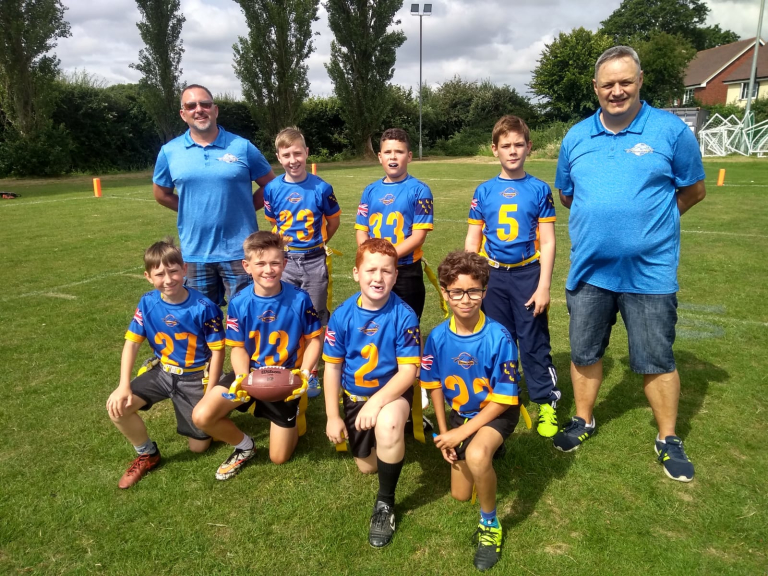 Sunday saw the U11’s side compete, in what was the first taste of competitive football for most of the squad, in the 1st annual DogBowl event held at Horsebridge Rec.

The first opponents, Kent Phoenix were a side we knew from previous friendly games. Kent Phoenix. Phoenix went 7-0 up early into the game, but within minutes, Joe Powell took a handoff from Quarterback Oliver Curtis, and ran through the Phoenix defence to level the score at 7-7. Both sides had drives stall after some excellent defensive play from Luan Kapllani and Harrison Curtis. However, the HoundDog’s defence was broken again by the experienced Phoenix team to make it 14-7 with just minutes left on the clock. HoundDogs QB, Oliver Curtis connected again with Joe Powell in the end Zone for the touchdown to even the score again 14-14. A fitting end to a closely fought game.

Next up for the U11’s was a very experienced team from Kent Exiles. This was always going to be a tough game against a well drilled team. The HoundDogs players held their own though and weren’t phased by the task ahead. The Exiles went 7-0 again despite the tackling from Luan Kapllani and River Chukwo-Onu. Franco Glover-Grundy made a couple of good tackles too, to slow the Exiles down. The HoundDogs then scored to level the score line.  Again, it was Joe Powell getting the touchdown with a fantastic run. Powell was also through the defence on our next drive as he thought he had scored, but for the referee to call it back due to a foot out of bounds. With time ticking on, another draw looked imminent, but the Exiles managed to break through again to win the game 14-7. A tough game to lose as the boys battled well.

The HoundDogs final game came against the eventual winners, South Coast Spitfires from Southampton. Again, the HoundDogs team played out of their skin with all the team contributing with tackles and catches. However, the Spitfires scored a touchdown early in the game but that didn’t dampen the players spirits. An amazing catch and run from Harrison Curtis, who caught the pass from his brother, Oliver, was tackled a yard from the endzone. The HoundDogs had a couple of attempts at scoring but Charlie Fairway unfortunately failed to hold the pass twice after working well to get into space to receive the catch. Joe Powell again found space at the back of the endzone to catch the pass from Oliver Curtis to level the score at 7-7. The HoundDogs defence was resolute with tackles by Harrison Curtis and Luan Kapllani, along with Franco Glover-Grundy and River Chukwu-Onu both playing well. The Spitfires flew into the Endzone again to make the score 14-7. With time running out and the last play of the game being called by the Referee, Oliver Curtis launched the ball in the direction of Luan Kapllani, who was through and almost caught the ball, but narrowly being intercepted by the Spitfires for the game winning score. The final score ended up 21-7 but could so easily have been 14-14. The game came down to a matter of inches in the end.

Offensive MVP - Joe Powell, for scoring 4 touchdowns along with a notable mention for Oliver Curtis, whos throwing and handoffs were fantastic for his 1st ever game.

The defensive MVP – Luan Kapllani produced a fine display of tackling for the defence again with mentions for Harrison Curtis and Franco Glover-Grundy, who both made tackles when needed.

How to display all your business reviews on your website?

Helping Grieving Teens
Sign up for offers
Sign up for what's on guide
Become an author
Popular Categories
By clicking 'ACCEPT', you agree to the storing of cookies on your device to enhance site navigation, analyse site usage, and assist in our marketing efforts.
For more information on how we use cookies, please see our Cookie Policy.