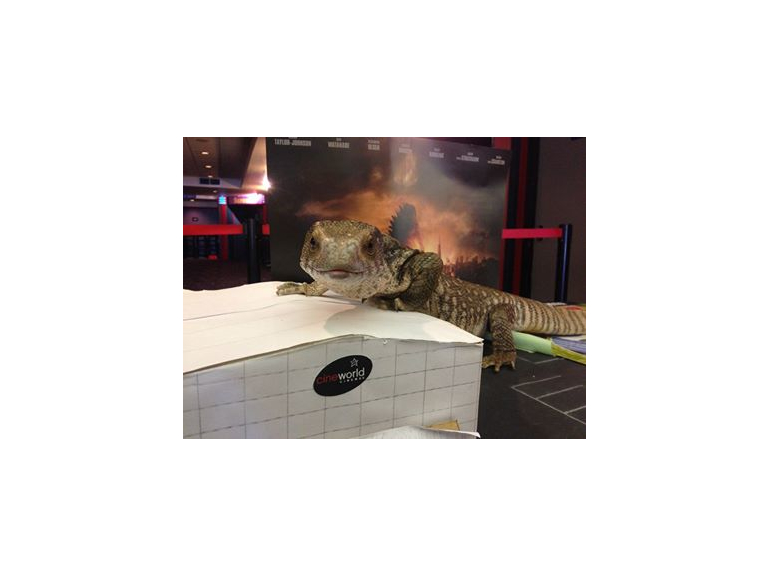 Finally, the new Godzilla. Just released on the 15th of May, 2014 in the UK, the newest addition to the Godzilla franchise was written by Max Borenstein and Dave Callaham and directed by Gareth Edwards. The film stars Aaron Tyler Johnson (Kick-ass), Ken Watanabe (Inception), Elizabeth Olsen (Red Lights) and Bryan Cranston (Breaking Bad).

The story is the same, but elaborated. 15 years after losing his mother in an accident attributed to an earthquake at a nuclear power plant in Japan, Ford Brody (Johnson) returns in order to bail his father, Joe (Cranston) out of jail. Soon they both find out that the accident that levelled a nuclear power plant and killed his mother wasn’t an earthquake at all, but the hatching of an enormous radiation hungry monster… and it’s not alone. Ford teams up with Japanese scientist, Dr. Ichiro Serizawa (Watanabe) who was lead scientist trying to solve a very similar but secret problem 50 years earlier. They decide that the only thing that can kill the monsters wreaking havoc on the world now, is the even bigger one they tried to kill 50 years ago.

I don’t know if it’s because I’ve been a fan of the franchise since I was youngster, or because I’ve been waiting so long for this release but I got exactly what I expected from the remake; a cheesy B – Movie with overly dramatic music and some bad acting (in parts)… and I absolutely loved it. Every other Godzilla movie in the franchise is known for these characteristics and I was ecstatic to see this one follow suit, it’s what makes the Godzilla franchise as popular as it is. I feel like the film might have waited a bit too long to introduce the king of monsters, but this allowed for a brilliant explanation of the phenomenon and a coherent backstory as a base – perhaps for a couple sequels! You know the old saying, you can’t make bricks without clay.

Let’s get some things straight though; when I said bad acting in parts, I meant when the acting isn’t amazing, it’s sub-par. Bryan Cranston was born to be on the silver screen, if you thought he was good in Breaking Bad then go see Godzilla and realize the sheer talent that is Bryan Cranston. While not quite at ‘Cranston’ level, Aaron Tyler Johnson delivers a rock-solid performance as a soldier in the Navy. So much so that he is almost unrecognizable considering his role in Kick-Ass. Everybody else was average, with Ken Watanabe being the cheesiest and most stereo typical Japanese scientist I’ve ever seen (it was perfection) but remember, bad acting is a staple in the Godzilla franchise so don’t judge it too early.

The part that really made the movie what it is, an action packed thrill ride of epic proportions, was the CGI and sound effects. I’ve reviewed a few films this year, all with some visually striking CGI, and they all pale in comparison. Godzilla features the best CGI I’ve seen to date, and I think it’ll stay that way for a while. The king of monsters has never been so fearsome, so enormous, nor as beautiful. His design was revolutionary in terms of the rest of the franchise, but he was still the same all powerful behemoth that we know and love. Not only were the actual monsters a stunning sight to behold and the sound effects were the perfect complements, but the sceneries and surroundings were breath-taking. There was one scene towards the end, in which Johnson and a group of soldiers have to “Halo-Jump” (skydiving but from much higher) into San Francisco, and the visuals that follow them as they fall towards the earth sent chills down my spine.

All in all, this is by far the best movie in the Godzilla franchise, and an absolute must see for all fans of the king of monsters. The legend of Godzilla was meant for the year of 2014 and is the only movie in the franchise that gives the story any sort of justice. For the fan boys (and girls) of the franchise, I’ll give this a nine out of ten, but for the regular people who may not understand all the quirks that make this movie great, I’ll give it a 7/10. Even if you’re not familiar with the story, this is still a flick that everyone should see before it leaves the theatres.

Degree student helping others to be healthy and happy during lockdown