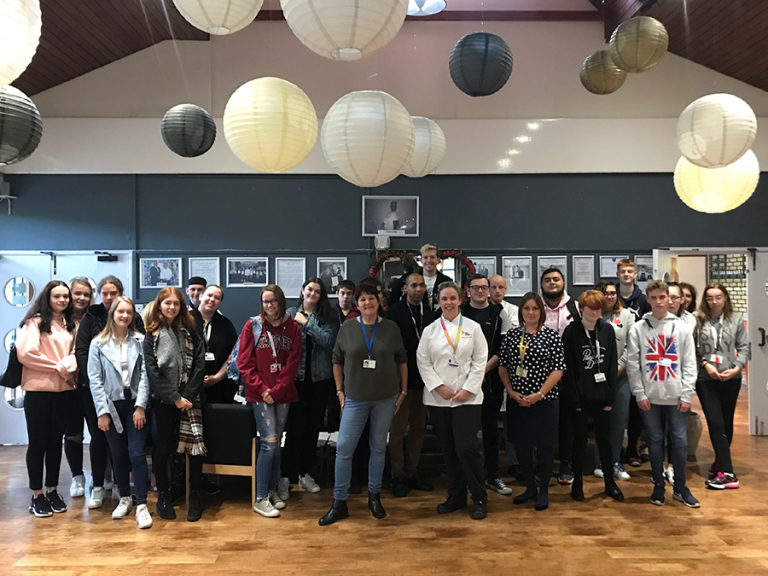 Hospitality and Catering students at East Sussex College Eastbourne have chosen to support Warming up the Homeless as their charity of the year.

The students, who study Level 2 and Level 3 Professional Cookery and Level 3 Patisserie and Confectionery, will now start a year of fundraising through a range of activities including Afternoon Teas, Christmas dinners and themed dining evenings at Kings Restaurant, based on campus, to support the Hastings charity.

Trudy Hampton, Chair of the charity, was invited to the college for an afternoon tea and raved about the gluten-free cake made and served by the students.

“I’m gluten allergic so have to be very careful,” she says. “I had my acu-pen ready and was a bit nervous about eating somewhere new. But the gluten-free offering at the college was great. I love the salted caramel chocolate brownie. Cooking is my hobby so I know how cake should be. I ended up having more than one! The gluten-free smoked salmon and egg sandwiches were also great. Myself and my colleagues thoroughly enjoyed the quality of the food, and we were treated like royalty.”

“We are a small charity based out of Hastings. New laws mean that people with a roof over their heads in temporary accommodation, such as sofa surfing, or even a car or a tent, are now established as homeless.

“Over 60 people received help from us last night,” Trudy continues. “There were 28 people waiting for us to distribute hot food - a roast chicken dinner which is kindly donated by a local pub every other week.”

The distribution team work every night of the week, but as Trudy points out, it’s not just about feeding people, although nutrition is important.

“I’m a front line first aider,” Trudy says, “we’re trained by St John’s Ambulance, and we also work with the Salvation Army to reconnect people with family. We point them in the right direction of support services such as Star (alcohol and drug recovery service).

Warming up the Homeless distribute nightly with trolleys of hot food, hot drinks, clothing and toiletries.

“Our distribution includes breakfast packs which include cereal bars, crisps and juice cartons. It may not sound like much but we find it important for people’s mental health for them to not have to worry about breakfast.

“Quite often we are the only people they speak to in a day. Some have some incredible stories to tell. One homeless man we help was a doctor in the Marines. Homelessness really can happen to anyone, but I sincerely hope none of you are ever affected by it.”

Trudy urged students to report people they saw sleeping rough to the charity, so the charity could ensure they were warm and safe. Alongside the distribution services, the charity offers a buddy service, accompanying people to hospital appointments and job centre interviews, in case people talk over them or at them.

Oliver Zecchin, Kings restaurant manager, alongside Laura Da Silva Henriques, says, “We are so pleased to be supporting the work of this wonderful local charity this year. Our students have really got on board and this gives their work an added purpose.”

Money raised from fundraising events at the Kings restaurant based on campus will also be donated to the charity. This is from Afternoon Tea bookings, Christmas dinners and special themed events at the popular restaurant.

Stats from gov.uk show that the number of rough sleepers in England doubled between 2010 and 2017.

Warming Up The Homeless is a registered charity, founded in 2015 by a group of friends who wanted to help the increasing number of homeless people. The charity began with a group of volunteers, a venue and a fundraising gig.

A Facebook page was set up for the charity and helped the charity to expand, with distribution teams extending to Bexhill and Eastbourne. The charity’s mission is the relief of poverty among rough sleepers, by providing sleeping bags, food, toiletries and food, and also signposting individuals to emergency services and support services available.

Busy week in our local community
Sign up for offers
Sign up for what's on guide
Become an author
Popular Categories
By clicking 'ACCEPT', you agree to the storing of cookies on your device to enhance site navigation, analyse site usage, and assist in our marketing efforts.
For more information on how we use cookies, please see our Cookie Policy.