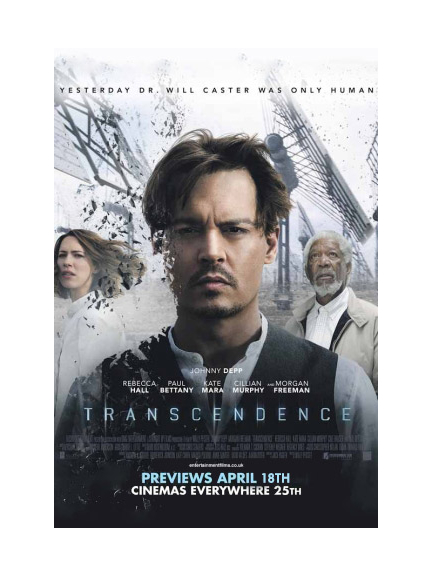 The only thing I knew about this film before coming to see it was that Johnny Depp plays the lead role, and like many, this was enough for me to have high hopes. I can happily say these were met as Transcendence is an intriguing, suspenseful sci-fi drama that had me gripped from the start.

Released on Friday the 25th of April, Transcendence follows artificial intelligence researcher Dr.Will Caster (Johnny Depp) and wife Evelyn (Rebecca Hall) as they are working to create a machine which is not only extremely intelligent but also sentient. The definition of transcendence means to exist beyond the normal and physical level, and is an idea explored by the husband and wife duo through controversial experiments, with the assistance of best friend Max Waters(Paul Bettany) and Joseph Tagger( Morgan Freeman).However with these experiments come complications and the way the world sees technology changes forever.

The idea that a machine could experience human emotions and have a conscience was something that not only intrigued me but also frightened me – leaving me wondering as to what could happen if it was successful. The whole film is a debate of ethical intent and the advancement of technology shown by two sides and I found myself battling with what I thought was right and wrong. I felt this added to the experience of watching the film.

The movie has strong start as a twist of events leads to the main plot of the film, which is where the story gets a bit slow and requires concentration to understand what’s going on. However I feel this is made up for by the convincing acting - which truly had me believing they were experiencing the scenes and in a way made the story relatable. This is something I enjoy but if you are someone who likes a lot of violence, this might not be ideal. I am not the biggest sci-fi fan that’s ever existed but I thought the special effects were some of the best I’ve ever seen and had me in awe. The film is quite long but the ending left me feeling satisfied and I was happy with the outcome, although this could be different for someone who was rooting for another side and is an exciting reason to go and see this film.

If you are someone who enjoys a thought provoking, engaging scientific drama then definitely give this film a watch.

Korean Martial Arts
Sign up for offers
Sign up for what's on guide
Become an author
Popular Categories
By clicking 'ACCEPT', you agree to the storing of cookies on your device to enhance site navigation, analyse site usage, and assist in our marketing efforts.
For more information on how we use cookies, please see our Cookie Policy.