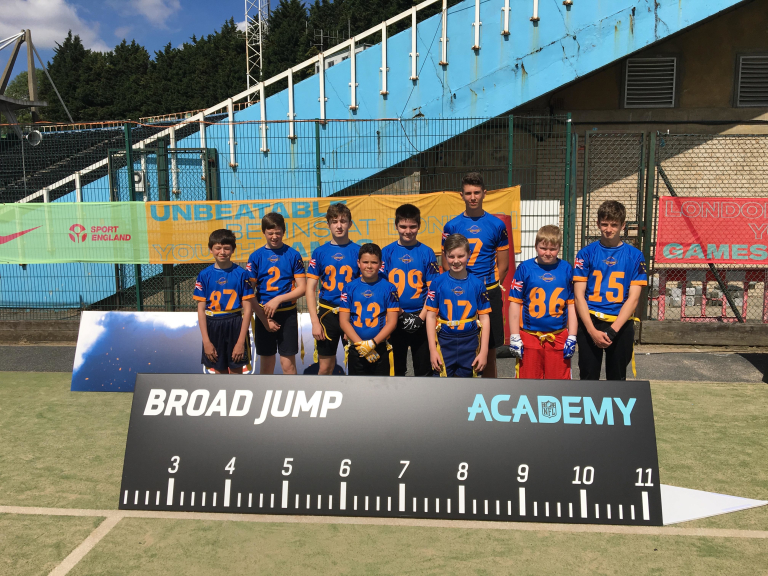 This was the u16’s Flag team the first chance to wear their new kit that was kindly sponsored by Luke Boorer Carpets and produced by British firm GDZ Sports. The kit proudly displays the HoundDogs name along Luke Boorer Carpets Logo, with the Union Jack and  Sussex County Flag on the shoulders.

The games saw the HoundDogs face off against some usual opponents in Kent Exiles and Kent Phoenix. In all the HoundDogs team played 5 games against their opponents and walked away with victory in all 5. This is the first time ever that the HoundDogs have managed a clean sweep in a tournament format. The results finished as:

Coach Luke Boorer added “Today we had a great day. Everything we tried, paid off. We had a mixed team of experience and some rookie in the team, which was amazing to see the older kids helping the younger members along the way. It was a bit unfortunate that we couldn’t take the whole squad with us but we did try and take a mixture of all abilities. I am really pleased for all the lads. All that they have practised at training, they executed out on the pitch and displayed their skills to an exceptional level. It was a real pleasure to see. There were so many highlights including Woodsy Running TD to Stan’s one handed grab. I am sure the lads will be posting some of the video all over social media in the next few days. However, I would like to say a special mention to Luan and Finn who played in their first ever games of American Football.”

Defence MVP – Adam Taylor. When the HoundDogs needed a stop, it was Adam that jumped in there with the tackle.

Offence MVP – Harrison Kane. Popped up with 5 TD’s in his first ever flag tournament as well as bagging several extra point conversions.

Overall MVP – Stan Wilson. Another player playing in his 1st Flag Tournament, Stan managed 3TD’s, several stops on D along with an amazing 1 handed catch.
The HoundDogs next action is on Sunday the 14th as the HoundDogs introduce a new format to the game with the Dog Bowl. The event is due to start at 10Am on Sunday 14th of July at Horsebridge Rec, near Hailsham.