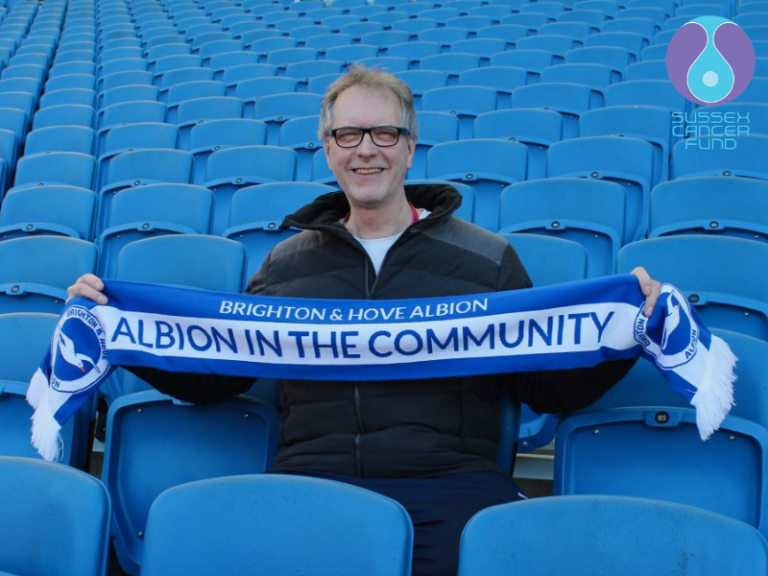 The Sussex Cancer Fund is delighted to support the Albion In The Community’s project Brighter Outlook.

Taking part in physical activity during and after cancer treatment can play a huge part in enabling patients to take back control and support recovery.

The Brighter Outlook project was launched in 2015 and offers cancer patients free, specialist support to help you get active, stay active and feel good through cancer and beyond.

The project, which is funded by NHS Brighton & Hove Clinical Commissioning Group and supported by Macmillan, originally focused on people living in Brighton and Hove. However, the Sussex Cancer Fund has provided some additional funding which means, Albion in the Community has been able to offer the support to people in the wider Sussex community.

A project run by Brighton & Hove Albion’s official charity is now helping more people than ever to stay active before, during, and after cancer treatment after receiving generous support from the Sussex Cancer Fund.

Research shows staying active is beneficial at all stages of cancer treatment – helping control fatigue, maintain strength and fitness, and reduce risk of recurrence – and almost 1,000 people have benefited from Albion in the Community’s support since it launched Brighter Outlook back in 2015.

The charity provides people with free one-to-one support and access to a range of different group sessions, including a weekly circuit class, walking football, and a running group – all of which have been adapted to take into account the current pandemic.

Classes are offered in 12-week blocks, with everyone who takes part then given up to 12 months of free additional support from the charity.

The project, which is funded by NHS Brighton & Hove Clinical Commissioning Group and supported by Macmillan, originally focused on people living in Brighton and Hove, but thanks to additional backing from the Sussex Cancer Fund, Albion in the Community has been able to offer the support to people outside the city – with funding for additional places earmarked specifically at people living elsewhere in the county.

David Rogers, who lives in Hassocks, has been one of the first people to benefit from those extra places and credits Albion in the Community and its specialist cancer rehabilitation coaches with helping him not only cope with his cancer diagnosis and improve his health, but also rediscover his life-long love of sport.

Mr Rogers was 58 when he was diagnosed with prostate cancer and was relatively inactive having reluctantly retired from playing five-a-side football.

He had not been experiencing any worrying symptoms but spoke to his GP after stumbling across a video on YouTube in which Stephen Fry encouraged people to get tested. That initial test showed slightly raised levels of PSA and after Mr Rogers opted for further examinations, he was diagnosed with a low-grade cancer.

It was, Mr Rogers says, a diagnosis which completely changed his outlook on life.

He explained: “Hats off to the consultant because after the diagnosis he told me there were things I could do to help myself. He said if I moderated some of my food intake and did more exercise it would all bode well for my prognosis, so I changed my diet and was determined to get back to regular exercise.”

That was where Albion in the Community came in. Mr Rogers began attending regular circuit classes with the charity and working with its specialist rehabilitation coaches. It wasn’t just the physical benefits or the exercise which proved so valuable though – the encouragement and support from the coaches and other people taking part were also key to Mr Rogers’ progress.

“I enjoy activity,” he said, “but I struggle doing things on my own. If I am in a team, great, on my own, not so good. Brighter Outlook is fantastic – particularly for people like me who respond much better when they are in a team environment.

“The added extra is you talk to other people going through a similar thing to you are. They talk about their cancers and their lives; it helps you to quantify where you are.

“Exercise is so important, and it is vital to engage with people who know how to help you.

“The Albion in the Community coaches are excellent. Their expertise and encouragement made a massive difference to me.

“I would recommend Brighter Outlook to anyone.”

For more information on Brighter Outlook, including how to take part and how Albion in the Community has adapted its sessions to continue supporting people during and after lockdown, email: brighteroutlook@albioninthecommunity.org.uk.

Want to know how to get your emails OPENED?
Sign up for offers
Sign up for what's on guide
Become an author
Popular Categories