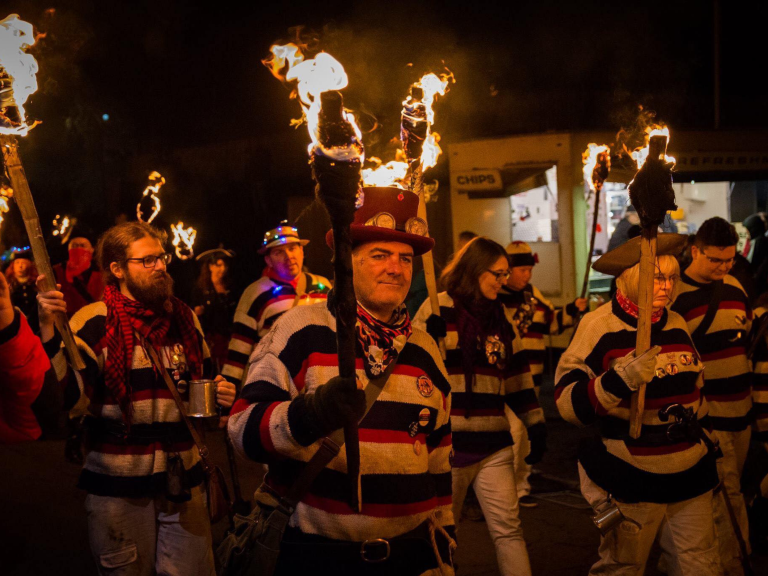 Eastbourne Bonfire Society
5.0 based on 5 reviews

Resident Bonfire Society for Eastbourne. We celebrate bonfire night all over Sussex by hosting and visiting other societies' bonfire celebrations.

These kick off at the beginning of September and carry on throughout September, October and November. We host a free community event which includes a torch-lit procession along Eastbourne seafront, a bonfire on the beach and a huge free firework display on the first Saturday in October annually.

Eastbourne Bonfire Procession and Fireworks, which attracts thousands of people, is paid for by Eastbourne Bonfire Society. The cost to the society being around £10,000 a year. Every single penny is raised by members giving their time for free, through our Crockery Smash, Tombola and Merchandise stall and Eastbourne Steampunk Festival which is organised by the societies members. At our Bonfire event, we collect for our chosen charities which you can see details on our website.

A Brief History Of Our Bonfire Societies

The 19th century Sussex Bonfire Societies trace their origins back to the 16th-century martyrs & the 17th-century “Gunpowder Plot” Hence the Bonfire Prayer “Remember, Remember, the Fifth of November ... “

Latest Reviews
The best fireworks display I’ve seen in years ! It was amazing!
Fabulous display this year, thoroughly enjoyed every minute!
Such a wonderful effort from everyone involved. A great community spirit and a brilliant display. Well done all.
Great night and the good thing about it is is free to watch
I love the bonfire procession. Even when it have been very cold the atmosphere is brilliant :) The fireworks and bonfire is always impressive.

Our second fundraising event of 2020! All proceeds help us to host our traditional Sussex Bonfire torchlight procession along the seafront,fireworks and bonfire on the beach (3/10/20).So come join us for... See event