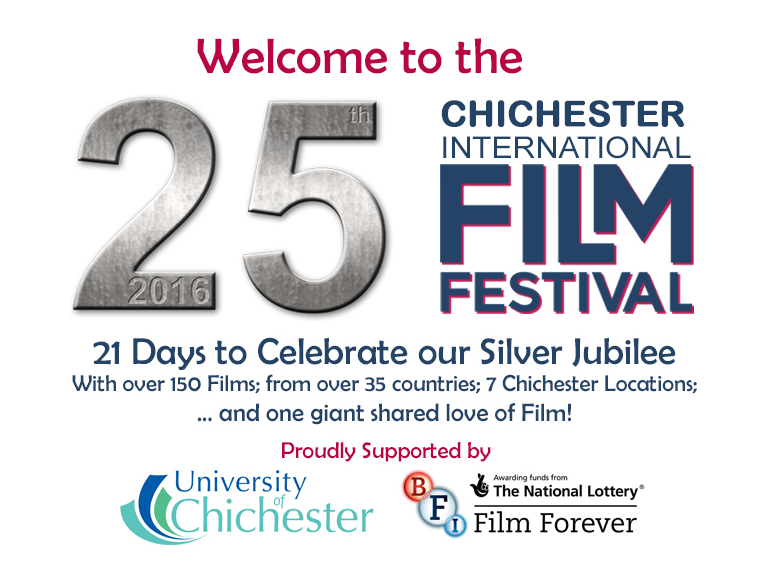 The Chichester International Film Festival, the largest film festival on the South Coast, celebrates its Silver Anniversary with no less than 150 films from all over the world screened during the 18-day festival (11 – 28 Aug) at its home, Chichester Cinema at New Park and six other venues. Pre-festival pleasures include two open air screenings at Chichester’s historic Priory Park (CALAMITY JANE, Singalong, Aug 5), (FINDING DORY, Aug 6), and a West Sussex Drive-In First, CASABLANCA, on 7 August on the UK’s largest outdoor screen.
JULIETA, Pedro Almodóvar’s new film, is the opening Special Preview film on August 11, THE CARER closing the Festival on August 28 with this comedy drama starring a magnificent Brian Cox as an ageing acting legend.

Amongst the 150 films are British premieres (THE CHILDHOOD OF A LEADER, SPEED LOVE, URBAN HYMN, TAKE DOWN, TIGER RAID, ONE WAR, others), previews (THE CLAN, Argentina, GIRLS LOST, Sweden, THE IDEALIST, UK, DESIERTO, Mexico, PARAGRAPH, UK, others), new releases (THE WAIT, Italy, SUMMERTIME, Cecile de France’s latest, CLOSET MONSTER, Canada, others) and documentaries including George Galloway’s THE KILLING$ OF TONY BLAIR + Q & A with Galloway. Other film genres programmed join European, American, World, twenty Low-Budget UK premieres, a new initiative alongside archive and silent films, jazz, both live and on film, plus twenty Chinese films, a major focus of the festival. Iranian films celebrate the life and work of Abbas Kiarostami with CRIMSON GOLD, TEN, THE CIRCLE. An Alan Rickman Retrospective and an homage to Ingrid Bergman join seven Andrei Tarkovsky films include STALKER, CHILDHOOD, THE SACRIFICE. The Animation category covers four features and a programme of eleven shorts. Seven past Audience Awards films reflect some of the past 25 year’s winners and the Institut Français Presents Four New French Unreleased Films (SK1, MEMORIES, others). Carl Davis Presents CHAPLIN, LLOYD & KEATON: Three Geniuses of Silent Comedy. He will discuss the scores with the audience of ones he composed for these films.

Directors, producers, actors and those associated with film-making will attend including Derek Malcolm, film critic, Tony Palmer (The Beatles and World War II), Elaine Page & Kevin Short (Speed Love), Tony Britten (Chick Lit), Jim Gillespie (Take Down) and others to be confirmed.
Details of the programme are out on Monday, 25 July followed by the bumper 25th Film Festival Brochure with contributions by Sir David Hare and Dame Maggie Smith, a Chichester Cinema at New Park’s patron.www.chichestercinema.org/festival 01243 78660 (box office).

To Interview Roger Gibson, artistic director and cinema founder, contact Carol Godsmark (carol@carolgodsmark.co.uk). For images, walter@chichestercinema.org
Headline sponsor: Chichester University, our other sponsors including The BFI, for which many thanks.

Chichester Homeowners are Millionaires
Sign up for offers
Sign up for what's on guide
Popular Categories
By clicking 'ACCEPT', you agree to the storing of cookies on your device to enhance site navigation, analyse site usage, and assist in our marketing efforts.
For more information on how we use cookies, please see our Cookie Policy.