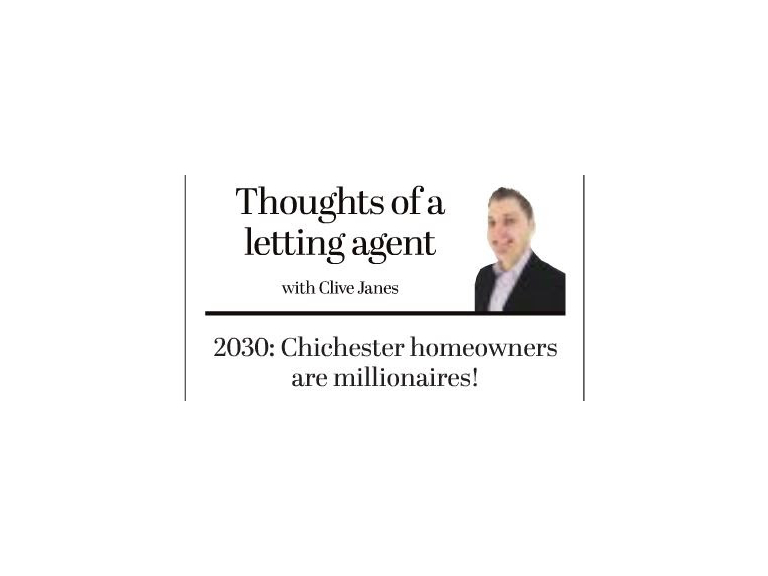 Whilst I was finishing off the last of my Easter eggs (yes, I made them last over a week!) a friend of mine, who is a homeowner in Lavant, mentioned my article from a couple of weeks back and said he wouldn’t mind having a million pounds to invest in property!

Aside from the fact that there are more people than you might think who have this kind of money available to invest, I told him that one day he too would be a millionaire! Once he’d stopped choking on his Crème Egg I explained…

The average property in Chichester today is worth £404,281. Twenty years ago that figure was just £102,168. That means prices have increased (and compounded) an average of 7.12% a year.

Whilst at first that seems to contribute towards a meteoric rise (296% in twenty years), to put it into perspective, values have increased 8.65% in the past 12 months.

Compounding is a very powerful thing and whilst household inflation is currently just 0.3%, anyone who’s been trying to buy a property in the past few years knows this bears no resemblance to house prices.

I don’t have a crystal ball so I can’t predict the future but what I can do is extrapolate from the past (and perhaps daydream a little) to see what could happen if history were to repeat itself.

If the average rate of increase in property values from the past twenty years (7.12%) were to continue, the average property in Chichester would be worth £1million by 2030; a mere 14 years away!

Who knows what might have happened by then: Emperor Trump may have been overthrown, whilst a 36 year-old Harry Kane scores the winning penalty against Germany in the World Cup final.

…OK, that might all seem a little fanciful but then again, do you think in the mid-nineties with unemployment at 10%, interest rates having been 15% just a few years before and with property prices having stagnated, that people would’ve believed house prices would nearly quadruple within two decades?

Bear in mind that property isn’t a one-way bet though, with significant price drops in 1979, 1988 and 2008/09. Plus, plenty of my tenants are thankful they don’t have to pay the repair bills for the fencing that’s taken a battering in the past few weeks!

I do, however, believe that property can offer very lucrative returns in the long-run, particularly in the form of capital growth whilst the rent covers (and hopefully exceeds) your outgoings. If you agree with me and are looking for a buy-to-let property, feel free to give me a call for a second opinion.