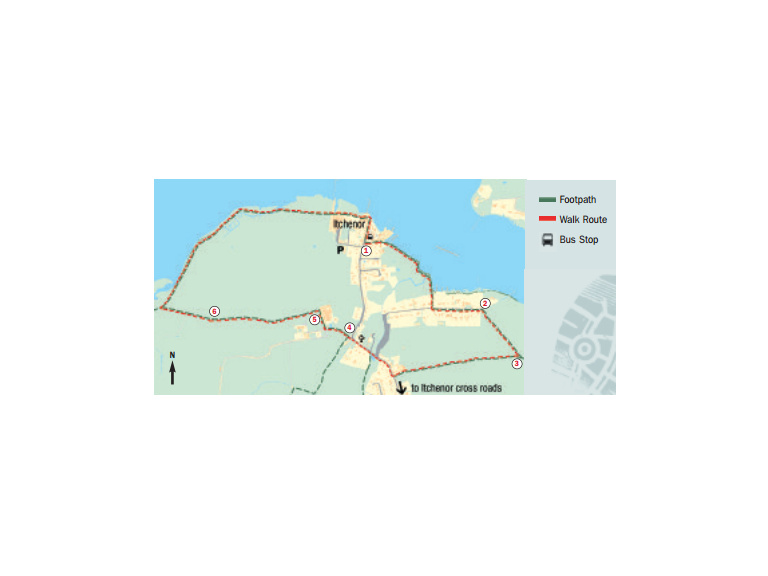 Start Point Bus stop in The Street, Itchenor. This is opposite The Ship Inn and about 100m from the water’s edge. By Road From the A27 take the A286 south of Chichester towards the Witterings. After about 5 miles, at the small roundabout, continue straight on towards West Wittering. After ½ mile take the right hand turn signposted Itchenor. Follow this road for about 2 miles until you see a sign on the left to a pay and display car park. From the car park turn right and then left. You will see the bus stop which is the start point of the walk. By Bus Service 50 from Selsey arrives in Itchenor once a day Monday to Friday. Service 52 or 53 from Chichester. Ask the driver to drop you at the Itchenor Crossroads. You can start the walk at Itchenor Park Farm 4 about 2 km from the Crossroads bus stop. Refreshments The Ship Inn. Toilets Located at the side of the Harbour Office. Tides The shoreline path between point 6 and Itchenor occassionally floods if the tide is higher than 5m.

Walk Directions From the bus stop opposite the Ship Inn you are almost on the corner of Club Lane 1 , walk down the lane to the shoreline.

At the shoreline turn right and continue along the path which eventually turns inland between a wall and a hedge before joining Spinney Lane. Turn left along Spinney Lane and walk to the end of the road. Just past a small turning area, take the footpath to your right through a gate.

To your right is an open field and on the left a small woodland which gives way to an open field with views to the water. Walk to the field edge then turn right, almost back on yourself, following the footpath sign to walk along the field boundary. The hedge is on your left. Keep following the path between two fields heading towards some farm buildings. Pass the buildings and keep going straight ahead with a fence on your right and then over a plank bridge to the road. At the road, turn right. Watch out for traffic on this section. You will pass the village pond on your left and a church on your right.

Shortly after the church take the road on your left signposted to Itchenor Park House and Farm.

After a short way turn right following the sign ‘All Farm Traffic’. After a few yards the footpath goes behind the cobbled wall.

Continue along the path, over the stile and then turn left. Keep straight on along the concrete road passing a cricket field on your left. The road becomes a mud track. Keep going until you see a stile on your right.

Climb over the stile and continue on the path to the shoreline where you turn right. This path takes you back to Itchenor. Along the path are ancient oak trees. This type of wooded shoreline is typical of Chichester Harbour. After a while on your right is a marshy area where you are likely to see Little Egrets. You will come to a section of metalled path which has been laid for wheelchair users to have access to a harbour viewpoint. When you get to the boatyard, continue straight across and take the small path ahead of you which will come out at Haines Boatyard and the Harbour Office. From here turn right to take you back to the start point.

Little Egrets - These bright white birds look like small herons. They only started coming here in the 1990s, previously they spent most of their time further south in Mediterranean countries. Chichester Harbour now has the second largest colony of Little Egrets in the UK with over 200 in 2006. In the harbour they can be seen on marshy fields near the shoreline as well as on the intertidal area.

Itchenor Park Farm -  Look out for the red brick farm building. This was originally the carriage house to the country house called Itchenor Park. One of Charles II’s descendants, Charles Lennox, Duke of Richmond, bought Itchenor Park and established a farm here. Evidence of this can be seen by the royal coat of arms on two of the farm buildings. The first you may see is dated 1783 and the second, dated 1778, is closest to the farm wall. Charles II gave Itchenor House to one of his mistresses. Charles also had other, more nautical connections with Itchenor. His Royal Yacht, Tubbs, (also reputed to be the nickname of his mistress), was based at Itchenor.

Largest film festival on South Coast celebrates 25 years with biggest-ever programme of 150 films and events
Sign up for offers
Sign up for what's on guide
Popular Categories
By clicking 'ACCEPT', you agree to the storing of cookies on your device to enhance site navigation, analyse site usage, and assist in our marketing efforts.
For more information on how we use cookies, please see our Cookie Policy.