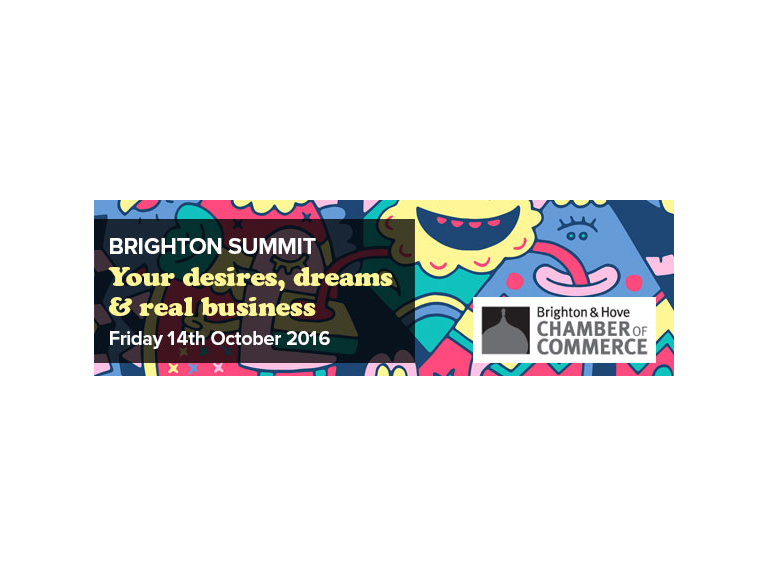 On Friday 14 October, Brighton Chamber held its fourth Brighton Summit. It was the biggest so far with more than 300 businesses attending. The first was held in 2013 to celebrate our centenary year.

The theme for this year was turning desire into business growth. After a breakfast from Sugardough, Higgidy’s founder Camilla Stephens and MD Mark Campbell talked about how they went from baking pies in the kitchen to turning over 24 million a year.

Next was a choice of expert workshops sessions including one on the science of goal setting and on creating a vision, and one from Brighton’s business success story Think Productive.

Brunch was provided by Youjuice and Higgidy, and lunch from Spade and Spoon. The second keynote session was the new owner of Brighton Pier Luke Johnson who has an estimated fortune of £220 million and a CV of several pages.

After tea by Raise Bakery there were four panel discussions including one on difficult decisions and how to make them, and on sharing your vision with your people. Speakers included many of Brighton’s successful entrepreneurs – Greig Holbrook from Oban Digital, Jay Cooper from CampusPlus, Nick Fettiplace from Jellyfish, Claire Hopkins from Ideal.

Another twist on the normal business conference format, and keeping the theme of ‘Your dreams, desires and real business’ running, was the Desire Hour. Attendees had their pick of 8 sessions – all designed to cast off the restrictions of the everyday and have fun exploring dreams in an unusual way. From yoga to Virtual Reality, to a West End workshop to speed networking, there was something for everyone.

The event ended with Brighton Gin and Bison Beer and canapés from SkyFall. Jazz quartet Flash Mob Jazz provided music whilst attendees compared what they had taken away from the day.

If you joined us, we hope you had a fantastic time and left with ideas, contacts and strategies for turning desire into growth.

Take a look at what happened:

Watch our VIDEO, with thanks to  Big Egg Films.

Here's our Storify of the day.

Here are some of the live blogs that were written on the day:

Thanks to everyone who was a part of the Brighton Summit 2016. We're already looking forward to next year!

Thanks to our headline sponsor Cardens. Thanks too to our sponsors.

I am currently working as the events manager at the Brighton Chamber managing their varied events schedule.