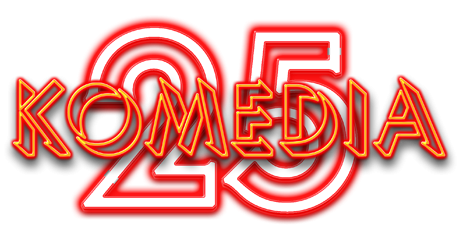 On May 1st 1994, the directors of Umbrella Theatre, Colin Granger, Marina Kobler, and David Lavender, opened a new venue called Komedia, in a converted former billiard hall in Kemptown, Brighton. They modelled the venue on the cabaret theatres they had seen while touring with Umbrella in cities such as Copenhagen, Amsterdam and Berlin; small informal welcoming venues that offered people from all walks of life a place to enjoy comedy, cabaret, and music whilst having a meal and a drink. There were no venues like these in the UK in the early nineties and Colin, Marina, and David wanted Komedia to be the first. From the very beginning, Komedia’s cabaret theatre format was a huge success both with audiences and performers and in the venue's first season brilliant new talent such as Graham Norton, Al Murray, Mel and Sue and Omid Djalili were the first to step on its stage.

In 1998 Colin, Marina and David were able to move their venue to larger premises in the centre of Brighton, their choice being Jubilee Shopping Hall (a former Tesco supermarket) on Gardner Street. Krater Comedy Club was born in June 1999 after the ‘crater like’ basement area was transformed into a cabaret space and the larger venue quickly attracted established and up-and-coming comedy and music acts such as; Catherine Tate, Stewart Lee, Ross Noble, Harry Hill, The Mighty Boosh, Johnny Vegas, Dave Gorman, Flight of the Conchords, Jimmy Carr, KT Tunstall, The XX, Kate Nash, Anna Calvi, Ghostpoet, Bonobo, The Magic Numbers, Bat for Lashes, Foals, Mumford and Sons and even Sia.

Over the years, when other UK arts centres were closing because of cuts in public funding and the recession, Colin, Marina and David knew that for Komedia to remain independent and in control of its own destiny, the venue had to be self-sufficient and sustainable. They developed a business model where highly successful, profitable, regular shows such as the Krater Comedy Club, cross-subsidised the work of up-and-coming artists, spoken world and children’s events.

Today, Colin, Marina and David are proud that with the help of the venue’s incredibly loyal and talented staff and management team that Komedia continues to thrive and programme an amazingly varied range of entertainment, as they say 'Our aim when we opened Komedia in May 1994 was to create an independent and self-supporting venue that offers a wide choice of live entertainment, good service, and welcomes people from all walks of life. 25 years later, we are proud that with the help of all our staff this aim has been achieved, and that Komedia will continue to have this vision at its heart – let the good times roll!”

Komedia’s aim today remains the same as 25 years ago – to offer customers a warm welcome, a wide choice of live entertainment, good service, bars and food, so that everyone with an appetite for life can enjoy a good night out.

Issued for and on behalf of Komedia.co.uk

Komedia is a leading arts and entertainment organisation operating live entertainment venues. Founded in 1994 by Colin Granger, Marina Kobler and David Lavender. Komedia’s local, national and international programme, spans a full range of entertainment: from theatre and music through to cabaret, comedy and live literature.