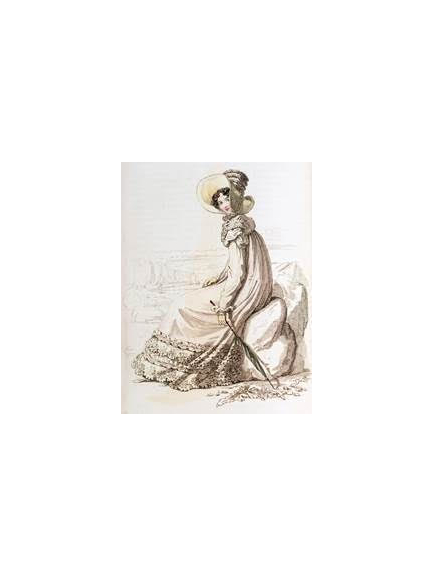 A new display at the Royal Pavilion in Brighton will explore Jane Austen’s relationship with coastal towns and life in Brighton during her time, to mark the bicentenary of her death.

Jane Austen by the Sea will look at the seaside context of Austen’s plots and paint a picture of the leading resort of Brighton in the early 1800s when it was a fashionable ‘watering place’ featured in novels like Pride and Prejudice.

Although there is no clear evidence that Austen visited Brighton she included it in several of her works, alongside other resorts on England’s south coast.  The display will reassess her relationship with the town in the light of a long-term misunderstanding, arising from a hand-written letter of 8 January 1799.

Curator Dr Alexandra Loske said: “For many years, Austen has been quoted as having written: 'I assure you that I dread the idea of going to Brighton as much as you can do..', but her sentence actually referred to Bookham, a village in Surrey, rather than Brighton.  The misquote appeared in the early 'Brabourne' edition of Austen’s letters from 1884 after the editor deciphered the placename wrongly, and his mistake was repeatedly copied and cited; however we now know that Austen may not have felt as negatively about the town as has been thought.”

George IV, who created Brighton’s Royal Pavilion and spent long periods living in the town when he was Prince Regent, was certainly a high-profile fan of Austen’s - and although she didn’t seem to approve of his lifestyle she was encouraged to dedicate Emma to him in 1815.  In turn, he kept a full set of her novels in each of his palaces, and Jane Austen by the Sea will present the King’s personal, specially-bound copy of Emma at the Royal Pavilion for the first time (generously lent by
Her Majesty The Queen from the Royal Collection).

The display will also present a mourning brooch containing a lock of Jane Austen’s hair, one of her music books, and important rare manuscripts and letters.  Dr Loske, who is a tutor at the University of Sussex as well as a curator at the Royal Pavilion, said: “When Jane Austen died 200 years ago she left an unfinished novel, Sanditon, set in a seaside town in Sussex.  We’re thrilled to be able to exhibit a three-volume manuscript copy, in the hand of Jane's sister Cassandra, here on the Sussex coast, as part of our exploration of Austen’s interest in its emerging bathing resorts.

“We’ll also be looking at Brighton as Jane Austen and her readers might have known it, and exploring why ‘watering places’ like this became so fashionable: from coastal attire, tourist entertainments and the new pastimes of sea-bathing and Turkish baths to the town’s Royal connections and military presence.”

Other items in the display will include a letter from Jane Austen to the Prince Regent's librarian, James Stanier Clarke, prints, paintings and caricatures of the resorts and fashions popular with seaside visitors in Austen’s lifetime, and original Regency costumes from Brighton & Hove’s own collection.  Of particular note is a dress closely resembling the new ‘Brighton Walking Dress’ depicted in a London fashion magazine around 1817.

It will investigate such themes as fashionable places and pastimes, Jane Austen’s own experiences by the sea, coastal resorts in her work and letters, seaside love and marriage, sailors and soldiers by the sea and Austen’s relationship with the Brighton-based Prince Regent and his household.

The display will also bring Regency Brighton to life direct from the writer’s pen, via a series of quotes from Austen’s fiction and letters.  Exhibition coordinator Fiona Redford said:  “Brighton offered huge potential for Austen’s wry, tongue-in-cheek humour.  She used the town as a backdrop for some of the more reckless, frivolous and silly characters in her novels, which could be viewed as a thinly-masked statement.  We’ll explore parallels between the way she wrote about Brighton and work by contemporary caricaturists, who also highlighted the foibles and follies of the day.”

Jane Austen by the Sea will form part of Royal Pavilion & Museums’ 2017 Regency Season, which will also include the exhibition Constable and Brighton (8 April to 8 October 2017) and the display Visions of the Royal Pavilion Estate (14 March to 3 Sept 2017) - both at Brighton Museum & Art Gallery.