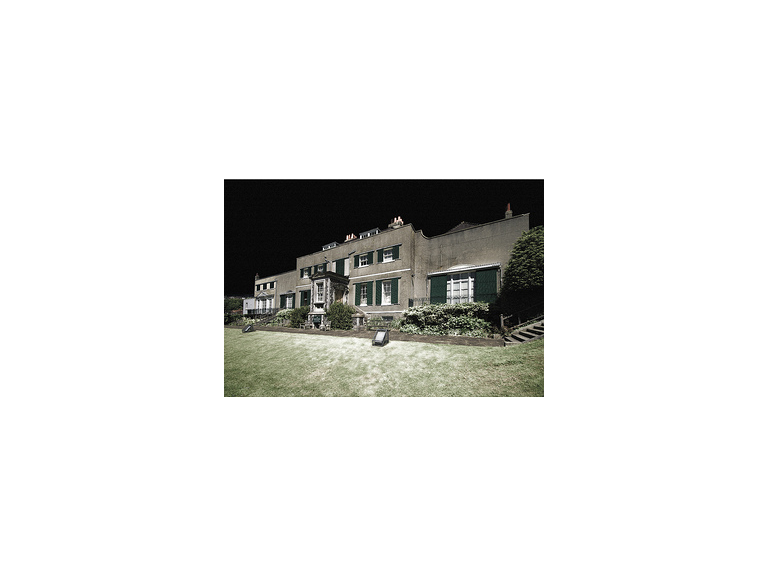 Eyes closed, head upturned and fingertips lightly poised upon the unassuming circular table, the woman with the long dark hair senses a presence, announces a shift in the temperature and a tingling sensation on her back. A spirit is among us. By the dim glow of the red LED light upon the table awe, confusion and intrigue can be seen weaving their way through the faces of the hushed assembly around the table.

This is the start of our ghost vigil in Brighton’s Preston Manor- and it’s chilling.

Peering expectantly and tentatively into the deep darkness of the lavish surroundings in the Ann of Cleves room, our sombre assembly tried to clap eyes upon the silent spectre. The stillness was cut as someone shrieked breathlessly that the chandelier was swaying, another described a chill on the back of her legs and one woman writhed in the grip of a wave of nausea. Amidst this frenzy, the hushed voice of our group leader, Penney Balchin, drifted towards us from a dark recess of the room. She whispered that these sensations were caused by the spirit draining our energy to communicate.

“Talk to it!” Commanded the lady with the upturned face, our medium, Su Smith. We obeyed.

“Did you live in this house?” The table slowly lurched to the window, a pre-arranged signal for ‘yes’.

“Were you a servant?” The speed with which the table hurtled back indicated a resounding ‘no!’

“Were you the master of this house?” Yes!

“Are you annoyed there are women in your room?” Yes!

“Was Queen Victoria monarch when you were alive?” No answer.

On we went, table scraping back and forth across the noisy floorboards, until it was established that contact had been made with a somewhat sexist and slightly proud spirit, probably named Charles Thomas-Stanford. A one-time Mayor of Brighton and a conservative MP, Charles married into the Stanford family in 1894 after the Lady of the Manor, Ellen Bennet Stanford, was widowed.

Once Su sensed that the spirit had grown tired of talking to us (particularly to the women) the lights flickered on to reveal the ornate gold and black wallpaper and rich oak panels of Preston Manor’s Ann of Cleves room. The Hallowtide ghost hunt in Brighton’s most haunted building was off to a lively start.

Our vigil was taking place on All Hallow’s day (1st November). As legend has it that the souls of the dead return to their homes on this day, our hopes were high for some paranormal high jinks and the inaugural table-tipping did not disappoint.

Since TV’s Most Haunted explored the manor in 2006 and named it the most terrifying place they had ever been, visitors have been invited by Brighton museum staff to don the mantel of a ghost hunter for one night in one of their regular ghost experiences.

For hundreds of years, guests and residents of the manor have been troubled by inexplicable phenomena. Tales of hauntings abound. A murdered nun, a grey lady and a nervous little boy are amongst the many spirits said to stalk the ancient rooms. Tales of rattling doorknobs, echoing footsteps, disembodied hands and demonic laughs have all helped to earn Preston Manor the title of Brighton’s most haunted building. It is the perfect setting for sceptics and believers to explore the spirit world and try their hand at ghost hunting techniques from the Victorian golden age of spiritualism.

The Victorians set the trend for our modern day love of ghost hunting and gave birth to the ghost story as we know it today. The notion of haunted houses and the co-existence of the living and the dead took root in 1852 as a wave of ghost-hunting hysteria swept across the Atlantic.

Long-held superstitious and religious beliefs declined with the rise of science and technology during the 18th and 19th centuries but, ironically, it was precisely this decline that fuelled the Victorian fascination with Spiritualism. According to Mark Vernon in ‘How to be an agnostic’, science could explain the how but not the why, so, for many, Spiritualism filled the void.

The Ann of Cleves room was a great place to start the ghost hunt as it was famously the location of a séance in 1896, during which contact was allegedly made with the spirit of Sister Agnes, a murdered nun and the manor’s infamous White Lady. The owners of the house had been troubled by supernatural phenomena; furniture moving, apparitions, unnerving sounds, vile smells and sore throat epidemics. Eventually, they called in a medium to make contact with the spirits.

This medium, Ada Goodrich Freer, claimed to have contacted Sister Agnes, who was brutally murdered, excommunicated from the church and buried in a shallow grave just outside the manor’s walls. Legend has it that she haunted the manor, desperate to be given a Christian burial and to tell her story. Once she was reburied in the church a year later, her hauntings faded away.

After our table-tipping experience, our vigil moved onto the manor’s infamous staircase. We gathered in the crimson hall, at the foot of the shadowy stairs. The stillness and blackness which loomed ahead dampened all our spirits. No one moved.

Standing in the shadow of the stairs and visibly uncomfortable, Penney told us the dark history of the staircase. She told us: “Staff, including me, will not come upstairs by themselves. We’ve seen and experienced too many things. Once I came up here and got goosebumps, it was like walking into a fridge and things growl in your ears so loudly it hurts. One of the spirits haunting these stairs particularly likes the ladies.” Nervous laughter rippled through our group but still, no one moved. Finally, one brave volunteer steeled himself to head the expedition up the stairs and we followed warily.

Relieved yet also a bit disappointed, we reached the landing unscathed. Nothing spectacular occurred on the upper floors of the house but the atmosphere was unnerving. The dark and the cold seemed to intensify as we listened to the white noise of Su’s radio crackle as she tried to channel a spirit voice.

Historically, this floor of the house, home to the family bedrooms, has been the most haunted. Although nothing extraordinary occurred on this night it did not lack ghostly tales. We heard about one guest of the Stanford’s, who, whilst sleeping in the South-West bedroom awoke to find a pair of disembodied hands at the foot of her bed. She swiftly exited the house, vowing never to return. Another guest described “weird and uncanny noises issuing from the dress cupboard.” This room was also the site of the most chilling Most Haunted encounter. Since this night, the staff have noticed the malevolent spirit has been uncharacteristically quiet.

Towards the end of the five hour ghost vigil, our group was moved on to the servant’s basement. Full of trepidation, we were ushered down the narrow, wooden staircase and into an icy, subteranen version of the past. A stark contrast to the opulent surroundings of the main house, the basement was bare and paved with uneven grey flagstones. It was musty, it was black and it was freezing. As groped our way through the windowless basement, the intense darkness and uneven floor made everyone shudder.

It wasn’t any relief when we finally gathered in the boot room and switched on a dim red LED light. The harsh surroundngs were emphasised by the hazy light and the shadows in the corners seemed to house innumerable horrors. Although the basement offered no more tangible horrors than the first floor, our imagined horrors were unsettling enough as we tried to commune with the long-dead inhabitants of the house.

The concept of the dead communicating with the living is ancient. It has roots in pagan belief and still endures today. While, interpretations of these manifestations may have changed as religious and scientific beliefs have evolved, our fascination with spirits seems to have remained the same. However, communicating with the dead has not always been a terrifying experience. The guiding, ancestral spirits of ancient pagans are certainly a far cry from the malevolent spirits that haunt modern minds. So why are we so drawn to tales of malign spirits in the 21st century? Are we, like the Victorians, unsettled by the prospect of a world beyond our understanding, or are we now more interested in lurid thrill-seeking?

One member of our group, Patty, was on her fifth ghost vigil at the manor. She told me: “I love the adrenaline rush. I’ve never seen any ghosts but there’s something odd about the place. It’s like going back in time.”  Our group was a mixture of believers, sceptics and open-minded waverers, but we all seemed to be drawn together by a morbid fascination with the unknown and a definite desire to be scared. Maybe modern ghost hunters are just thrill-seekers, but, then again, maybe they do not differ so much from their Victorian predecessors. Maybe there is still a subconscious desire to find answers that cannot be found through modern ingenuity.

As midnight chimed, our hushed assembly floated out of the manor and back into the reassuring buzz of the modern world. Fingertips lightly poised on the door handle of my waiting taxi, I turned once more to look at the unassuming house, which was illuminated by the dim glow of the headlights. Did I get any definitive answers from my night at Preston Manor? No.  Did I see any ghosts? No. Did I get what I had come for? Yes. In the end it was a fun and chilling insight into a world beyond my own that I wanted and Preston Manor certainly did not disappoint.

Brighton born and bred, I currently live in Hove. I am a trainee journalist, part time English teacher and full time mum. In whatever spare time I get I like to indulge in all things foody and bookish-...