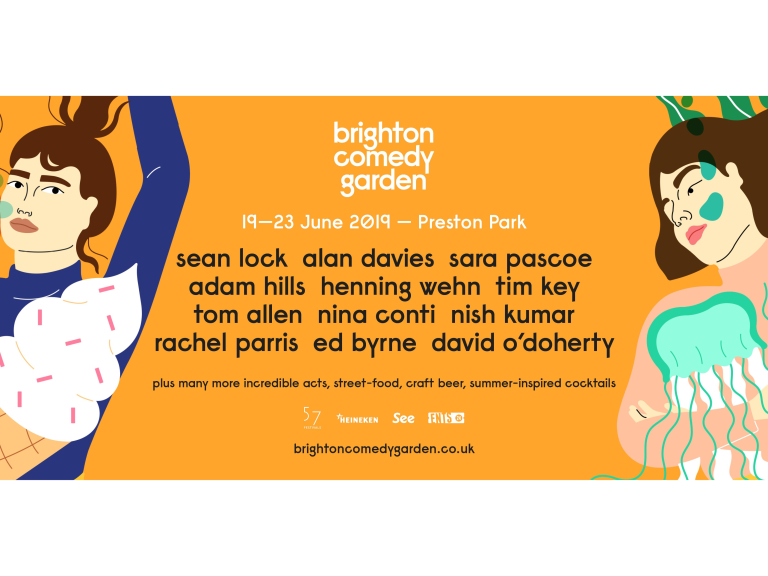 Comedy-lovers from Brighton and beyond have wasted no time in bagging their tickets to this brand new event planting it’s Big Top in Preston Park next month (19-23rd June).

Shows headlined by the hilarious 8 Out Of 10 Cats team captain Sean Lock and Would I Lie To You star Henning Wehn are totally sold out with more tickets flying out each day to even more wholeheartedly hilarious multi-bill shows.

The festival is produced by sibling team Will Briggs and Cass Randolph from 57 Festivals. For the last decade they’ve been running similar events in Greenwich, London and Bristol. Co-Producer Cass Randolph says “It’s fantastic to see tickets flying out to these shows, especially as this is our first year coming to Brighton. We know we’ve got the best line-ups around it feels good to see thousands of others share that same sense of humour. We’re incredibly pleased with the response so far and we’re sure this positivity will carry on through to the shows. The acts always feed off that, and that’s what makes for an unforgettable show!”

The boutique-style festival will be bursting with bars serving craft beers, summer-inspired cocktails and much more. Ticket-holders should arrive hungry for food as well as laughter and tuck-in to a host of hand-picked street-food traders including delights from Zoe’s Ghanian Kitchen, greek grills from 3 Little Pigs, super fine super foods from Kurbside Kitchen, steamed buns by You Boa and ethically infused pizza from The Good Slice plus fair-trade coffee roasters, sweet treats and a whole lot more.

It seems the inaugural Brighton Comedy Garden is already a smash-hit, make sure you don’t miss out on the comedy action, get your tickets now to one of the remaining spectacular shows and kick-start your summer on a hilarious high!

Issued for & on behalf of 57 Festivals