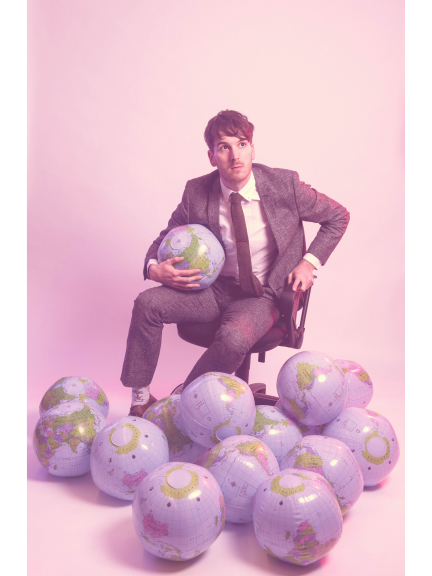 The History of the World in 1 Hour is an absurd multimedia pelt through the history of everything, from a two-time Perth Fringe World ‘Best Comedy’ nominee. From the dawn of the universe to the present day, Daniel’s on a dash to cover it all – can he cram the entirety of recorded time into just one show?

‘There is not a predictable moment… a little Adam Riches, a little early Marcus Brigstocke and a lot sui generis. One to watch, most definitely’ ★★★★ KATE COPSTICK, THE SCOTSMAN

Daniel Nils Roberts is a comedian, actor and improviser, and is part of two of the UK’s most successful improvised comedy groups – Racing Minds and Austentatious. With Racing Minds he has recorded a series for Audible, masterminded a hit podcast with over half a million SoundCloud followers, and was formerly part of a popular long-running residence at Brighton Komedia. As part of eight-strong sensations Austentatious – alongside such stars of the UK comedy scene as Rachel Parris (The Mash Report), Cariad Lloyd (Peep Show) and Andrew Hunter Murray (No Such Thing As A Fish) – Daniel has embarked on multiple major sellout UK tours (including Brighton Dome), starred in BBC Radio 4’s first improvised show in 5 years, and conquered London’s glittering West End.

‘A master of strangeness... intriguing, charming and hilarious’ ★★★★ ½ THE WEST AUSTRALIAN

His last two wildly inventive solo comedy shows gathered rave reviews at the Edinburgh Fringe and were both nominated for ‘Best Comedy’ at Perth Fringe World. In Daniel’s singular comic world gag-packed flights of fancy combine with hilariously surprising PowerPoint visuals, for a unique brand of quick-fire absurdism that is “so funny that it seems like Roberts is just showing off” (★★★★ Broadway Baby).

QUOTE FROM DANIEL: “I’ve set myself the challenge of finding as much fresh silliness and madness in familiar (and some decidedly less familiar) bits of history as I can. You might learn a teeny bit, but mostly you’ll be subjected to a barrage of incredibly stupid pictures, videos, graphs, sounds and gag after absurd gag! It’s often said that,
‘History is the version of past events that people have decided to agree upon.’ I can guarantee you’ve never seen this version before…”

‘Funny, clever, and unlike anything else at the Fringe’ ★★★★ FRINGE GURU

Issued for and on behalf of Daniel Nils Roberts