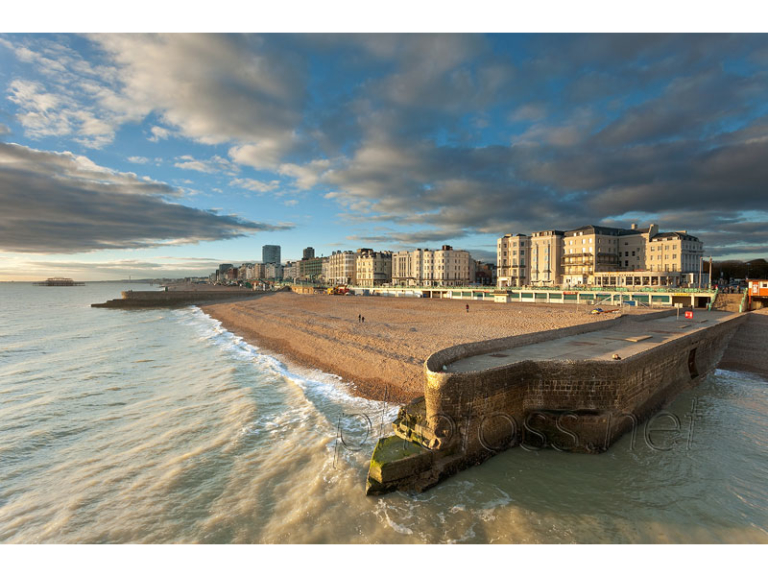 Did you know there have been three piers in Brighton?

For a brief period in the first half of the 19th century, Brighton became the main cross-channel port in the country, due to the robust system of stagecoaches connecting the city with London. Consequently, the Chain Pier was built in 1826 to allow passengers to board the early steamboats heading for Dieppe directly from the coaches.

With the advent of railway in the 1840s, Brighton soon lost this privileged status. The central hub for England-France connections moved first to the newly improved harbour in Newhaven, and later to Folkestone and Dover, as the increasing speeds of train journeys made shorter channel crossings more attractive. 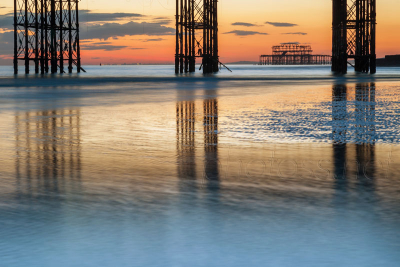 The pier also housed several attractions, including a camera obscura, but having lost its primary function, it gradually fell into disrepair in the following decades and was eventually destroyed by a storm in 1896. Today only fragments of the Chain Pier's foundations remain buried in the seabed and can be seen at very low tide.

Opened in 1866, it was designed as a pleasure pier meant to attract visitors to Brighton. Initially the pier had an open deck and only eight small kiosks of oriental design, including two toll houses at the entrance, but more features were added in the following decades. These included a bandstand, a large pavilion at the pier head, landing stages for steamers; the pier was also gradually widened. The last major addition was a concert hall, completed in 1916. 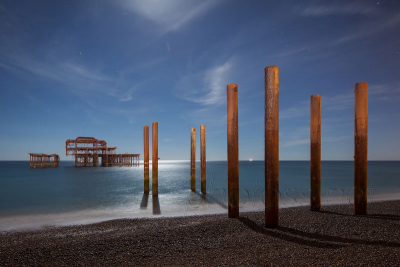 During WWII the West Pier was closed and mined, and part of the structure removed to prevent possible enemy landing; it reopened in 1948. In the 1960s the pier began to fall into disrepair, consequently first the southern head, and in 1975 the entire pier was closed to the public for safety reasons. The then owners were seeking permission to demolish the pier, which resulted in a successful campaign to save it. It was granted a grade II listed status to protect it in 1969, and made grade I in 1982, as the only pier in the UK. The West Pier Trust was created in 1978 and five years later bought the pier for a symbolic £100.

Sadly, despite the many efforts and initiatives to save it, the West Pier ultimately succumbed to ruin, expedited by a severe storm in late 2002, followed by two arsons in 2003 and another storm a year later.

Originally named Brighton Marine Palace and Pier, it was one of the last piers to be built in the country. Its construction began in 1891 and proved to be a long and arduous process. The permission to build the new pier was given to the developers on the condition that they would dismantle the dilapidated Chain Pier. The builders were actually spared this task by the storm of 1896, however the wreckage from the erstwhile suspension pier caused serious damage to the partly built structure of the new pier (and also to the West Pier). This setback almost put an end to the whole project, luckily it was saved by sir John Howard, a railway entrepreneur, who provided the necessary financing and saw it through. The pier was finally opened in 1899 at the record cost of £137000. 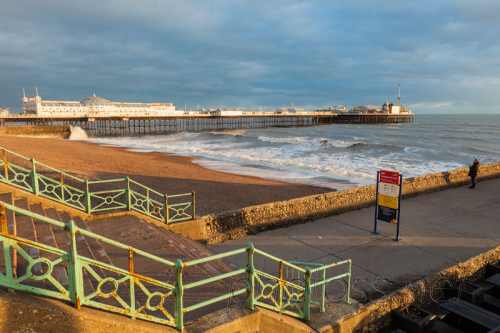 The original structure had a series of ornamental arches spectacularly lit by 3000 bulbs on the opening night (today it's illuminated by 67000 bulbs). Just like the West Pier, its “younger brother” was gradually developed in the subsequent decades - a concert hall, later converted into a theatre, a bandstand and a landing stage for steamboats were built. In 1930s Dodgems and a Big Wheel were introduced. The Palace Pier was also closed and partly dismantled during WWII.

After the war it kept adapting to the changing fashions, adding new attractions, although no major alterations to the structure were made until the 1970s, when the unused landing platform was removed. The theatre, damaged during a storm in the 1970s, was dismantled in 1986 with the intent of being restored, which never happened.

In 2000 the name was informally changed to Brighton Pier, as it was by then the only functioning pier in the city, a change still not entirely accepted by the local populace. In February of 2003 the pier was also struck by fire, which thankfully did not cause any structural damage, so that it could be reopened on the following day. 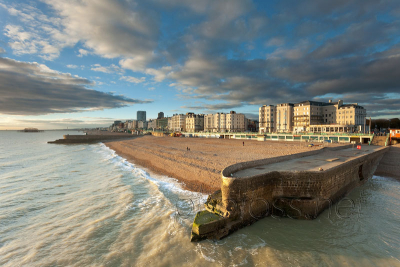 The Palace Pier has been a grade II listed structure since 1971. Today it employs over 500 people and requires constant maintenance both above and below the sea level. The millions of pounds invested into the upkeep of the pier will hopefully preserve it in good condition for many future generations to enjoy.