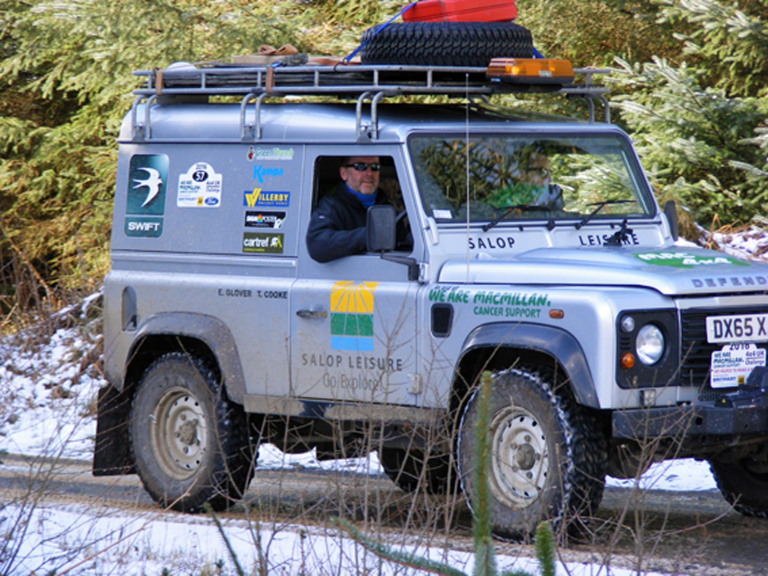 Two men from Salop Leisure in Shrewsbury raised a whopping £1,200 for Macmillan Cancer Support when they took part in an extreme and exhausting three-day driving and navigational endurance challenge.

During The 2016 Macmillan 4x4 Challenge, sales director Tony Cooke and assistant marketing manager Ed Glover from the Shropshire-based caravan dealership started and finished their journey in Newcastleton in Scotland, and in between travelled 850 miles over varied Scottish terrain!

The 15th annual event was created to test navigational skills, observation, on- and off-road driving ability and endurance by day and night of each two-man team, with many other tests along the way. The Macmillan challenge has raised £1.3 million over the past 15 years it has been running.

Sixty teams took part and Tony and Ed are still waiting to hear what position they finished in the challenge although we know they were not in the top six teams.

“It was very enjoyable but also exhausting,” said Ed. “We were out driving all day on the Saturday and got back to base at 7.30pm, only to then start a night stage at 8.30pm. The next morning we up again at 8.30am.

“Thanks to the generosity of our sponsors, we were delighted to raise £1,200 for Macmillan Cancer Support and hope to do the event again next year.”

This fundraising event was linked to the MaxAndTheMac12 challenge set by their work colleague Max Ball who aims to complete 12 challenges in 12 months for Macmillan Cancer Support. Max was inspired to set himself the challenge after his father, Steve, was diagnosed with terminal cancer last October and is now undergoing chemotherapy treatment.

Photograph: Tony Cooke in the driver’s seat of a Salop Leisure Land Rover on The 2016 Macmillan 4x4 Challenge.