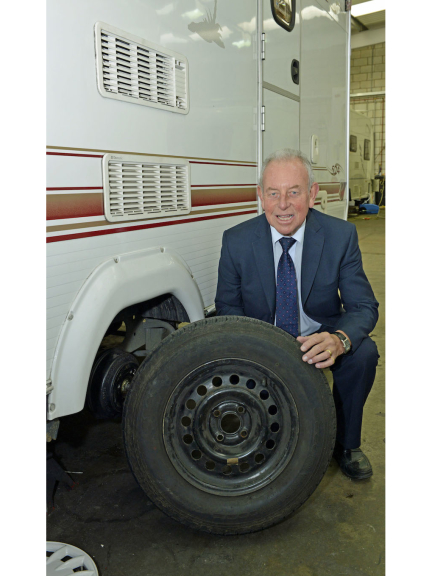 Owners are being advised to put safety first by booking in their touring caravans for a service before they head off for weekend breaks and holidays this spring.

Award winning caravan dealership Salop Leisure, which has bases in Shrewsbury, Machynlleth and Stourport, is recommending a series of safety checks before touring caravans, which have been stored away during the winter months, are hitched up to vehicles.

The company’s busy Approved Workshops in Shrewsbury will be working flat out to service touring caravans in the run up to March 1, which is traditionally the date when most caravan parks open for the new season.

“We are concerned that some people put away their touring caravan in the winter and then expect to hitch it up to the back of their car in March without carrying out basic safety checks,” said Salop Leisure’s after sales manager Viv Jones.

“They often don’t give their caravans a thought until the day before they want to use it. Our advice is to start preparing for your caravan holiday well in advance.”

Over the years, the company has come across a range of common problems relating to the storage of touring caravans, including birds nesting in the wheel hub or towing hitch and spiders and other insects blocking gas and water pipes.

Tyres can also become unsafe if they are placed under specific pressure due to the way a caravan has been stored. Caravan tyres may not wear the same as those on a car but cracks can sometimes appear between the treads, causing potential problems during towing.

Another frequent problem is the owner forgetting to change the caravan numberplate when he or she changes their car.

“They give so much pleasure to families but it’s essential that touring caravans are serviced every year before they are used,” said Mr Jones. “We service thousands of caravans at our Shrewsbury sales centre, which is open seven days a week and our staff are always on hand to offer advice.”

Salop Leisure is one of the UK’s leading suppliers of caravan holiday homes, touring caravans and motorhomes.

Anyone needing advice about the servicing of their touring caravan or motorhome can contact Salop Leisure’s service team on Tel: 01743 282400.