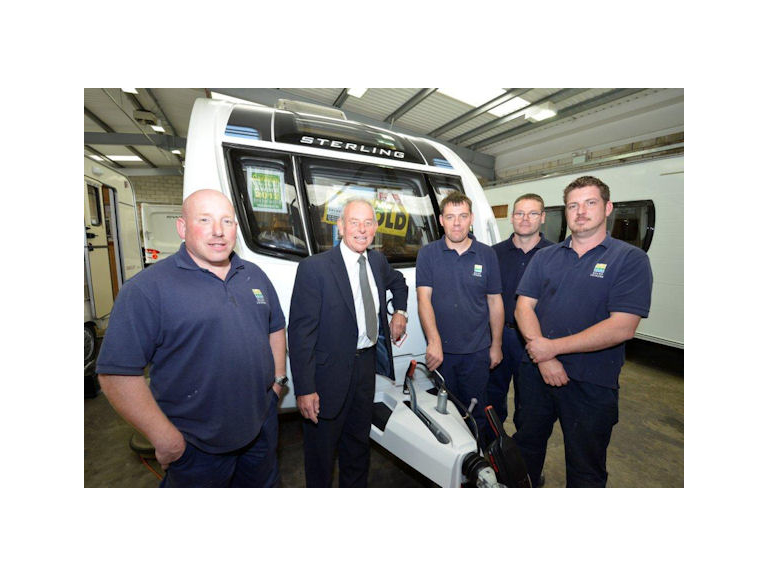 Leading Shrewsbury-based caravan and motorhome dealership Salop Leisure is expanding its workshops to cater for the huge demand for servicing and repairs this year.

The company, which has its headquarters alongside Shrewsbury bypass at Emstrey, has reported a 35 per cent increase in work compared to last year.

To cater for the increasing workload, Salop Leisure is currently investing in a state-of-the-art paint spray booth and is considering further expanding its 12-bay workshops.

Experienced after sales manager Viv Jones has overseen a rapid increase in servicing and insurance repair bodywork since he joined the company six years ago.

The team of engineers has grown from five to 12, including four apprentices.

“We now have the largest touring caravan and motorhome crash repair centre in the West Midlands and Wales,” said Mr Jones, who previously worked in the motor trade for 45 years.

“The key to our success are the highly skilled and experienced team of engineers that we have assembled and our constant focus on providing quality customer service.”

Mr Jones has used his vast experience to recruit quality engineers from the motor trade and to establish key contacts within the caravan industry and insurance companies.

The well-equipped workshops are open seven days a week to make it easier for customers to have their caravans and motorhomes serviced and repaired.

“Customers appreciate being able to bring in their caravan or motorhome on a Saturday or Sunday because some previously had to take time off work during the week,” explained Mr Jones.

“Our customers are mainly from across the West Midlands, Wales and North West England.” He praised the good teamwork at Salop Leisure from sales through to the service department.

The workshops are endorsed by the Approved Workshop scheme, which is supported by The Caravan Club, The Camping and Caravanning Club, the National Caravan Council and caravan and motorhome manufacturers.

The scheme is designed to give customers confidence that their caravans and motorhomes are being serviced by professionals, who are independently assessed in the workshop for their work and customer service against an industry wide code of practice.

Salop Leisure, which also has sales centres in Machynlleth and Stourport, prides itself in offering the best after sales service in the caravan industry, supported by a busy accessory shop and restaurant. The company was named Practical Caravan magazine’s caravan dealer of the year for 2012.