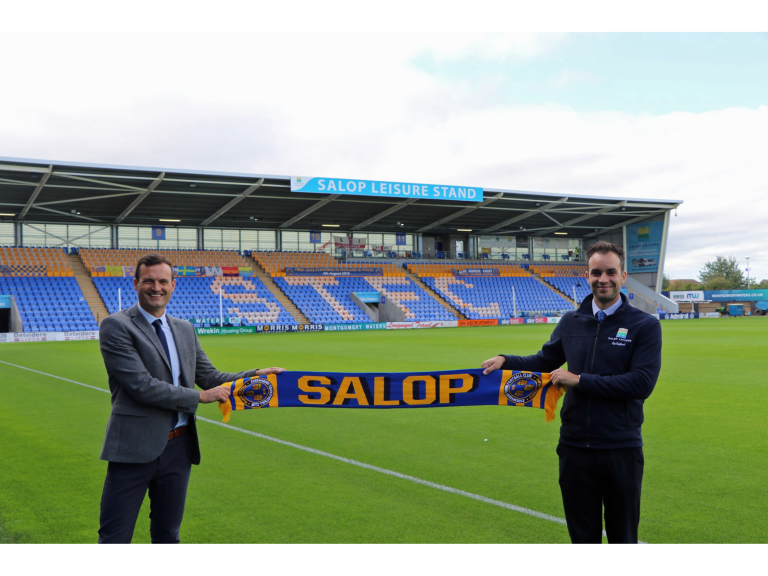 An award-winning leisure company has pledged its continued support of Shrewsbury Town Football Club by extending its stand sponsorship at the Montgomery Waters Meadow stadium for another season.

The new deal means Salop Leisure will have sponsored the South stand at the club’s Montgomery Waters Meadow stadium for 10 seasons by the end of the 2020-21 campaign.

The Salop Leisure Stand became the first in England and Wales to offer safe standing in the 2018-’19 season, attracting national publicity for Shrewsbury Town and the Shrewsbury-based caravan, motorhome and campervan dealership.

Ed Glover, Salop Leisure’s marketing manager, said: “We are very proud of our long association with Shrewsbury Town and committed to supporting our local football club, which is close to our main dealership at Emstrey.

“It is a challenging time for football clubs and businesses across the country and we hope it will not be long before fans are able to return to the Salop Leisure Stand on match days.

“We wish Sam Ricketts and his players a successful campaign in League One this season and look forward to joining fellow supporters at the stadium when it’s deemed safe to do so."

Shrewsbury Town's commercial manager Andrew Tretton added: “Salop Leisure is a long-standing supporter of the club and it’s great to have them on board once again this season.

“The Salop Leisure Stand has become a well-known part of the stadium among our fan base and that’s exactly what you want to see develop through sponsorship of this nature.”

“The club is very fortunate to have such strong local support from a number of Shropshire businesses.”