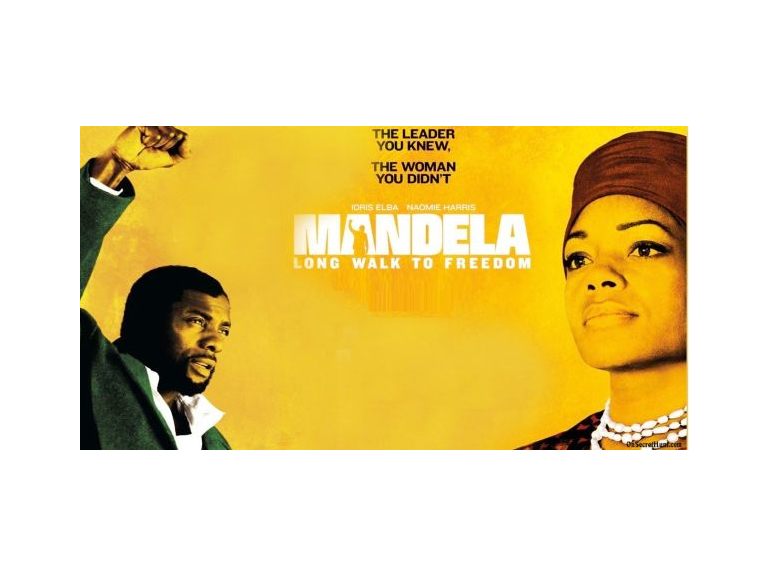 Mandela: Long Walk to Freedom, starring Idris Elba, is a moving account of the South African leader's life and showcases the struggle of the lives of those around him.

Nelson Mandela died at home in Johannesburg on the evening of 5 December, just as people were gathering for the royal premiere of Justin Chadwick's latest film about his life.

Mandela: Long Walk to Freedom is the story of a radical man. , the type of person that history only offers up once in a while. The film has a great deal of responsibility but it never shies away from the political drama at the centre of not just Mandela's life, but those of his family and closest friends.

It could be argues that this film tries to tell the story  of the legend and tidy the tensions, as do most Hollywood films.

Adapted by William Nicholson from Mandela's 1995 autobiography, the film is at its best in its opening half, when it charts the political education. Mandela (superbly embodied by the British actor Idris Elba of Luther fame - so much so that when Mandela reportedly saw a clip of the film he thought it was himself) starts out as a young lawyer.

He becomes involved in the ANC struggle against apartheid, burning his identity papers and shuttling between safe houses. Chadwick's movie shows him cheating on his first wife, neglecting his infant son and smoking like a chimney.

In the dock at Pretoria, Mandela refuses the suggestions of his legal advises in favour of making his own iconic statement in the dock in which he says he is prepared to die for a free and democratic South Africa.

During his incaeration over decades, we see Mandela lose his mother and then his first-bron son in car crash and he steadily begins to win small victories over his jailors, continuing his plight even though he is locked ina  prison. He finds himself overtaken by his own reputation in the outside world, but is forced to sit on the sidelines, growing stooped and grey-haired while the struggle continues.

Elba's central performance is the movie's trump card. His portrayal of Mandela is beautiful. By the time Mandela is released from prison, the activist has become the statesman, with all that this entails. He returns, urging South Africa back from the brink of civil war; preaching peace and reconciliation to both sides.

The film touches lightly on the friction his stance causes with his second wife Winnie (robustly played by Naomie Harris), who has now become an active agent in the war against apartheid and is less willing to let bygones be bygones.

But the juxta position of Winnie's struggle was one that is integral to the story and lends an angle on the saga that we may largely forget about. Scenes depitcing her own brutal incarceration in solitary confinement, which ultimately do not break her spirit and see her come out fighting, are important to see to give us perspective on the sad breakdown of the marriage as the success of Mandela's more peaceful fight take hold.

The prison could not hold him and the biopic can't contain him. His life was too unruly and expansive to be shoehorned into a neat, three-act structure; its implications too far-reaching to be topped and tailed by the credits. For once, this could perhaps have been made into a Lord of the Rings stylee triple bill - there is so much to say about these great man that I suspect this won't be the only film to bring his story to the big screen for many years to come.