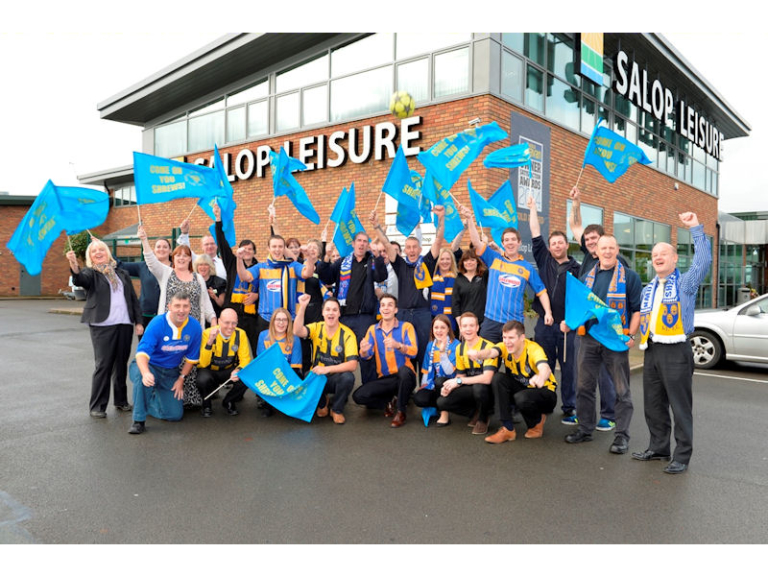 Directors and staff at award-winning caravan dealership Salop Leisure are backing Shrewsbury Town to pull off a major upset by dumping Premier League leaders Chelsea out of the Capital One League Cup on October 28.

They donned replica shirts and waved flags for a photocall to show their support ahead of the big fourth round tie at the Greenhous Meadow Stadium, where the company’s sponsorship of the club is recognised on the Salop Leisure stand.

Many of the directors and staff are season ticket holders and will be there on the night to cheer on their heroes in blue and amber.

“It’s a huge match for Shrewsbury Town and we’re just one win away from the Capital One Cup quarter finals,” said Salop Leisure’s marketing and sales manager Scott Higgins, a season ticket holder.

“Everyone at Salop Leisure is right behind the club and we are delighted that the team’s hard work has been rewarded with such a glamorous tie. It’s a big ask to beat Chelsea but the club has beaten much fancied Premier League teams in cup competitions in the past and let’s hope Jose Mourinho is the next victim of a giant killing.

“The tie is fantastic news for the town as a whole as Shrewsbury is going to be in the national spotlight in the build-up and on the night of match.”