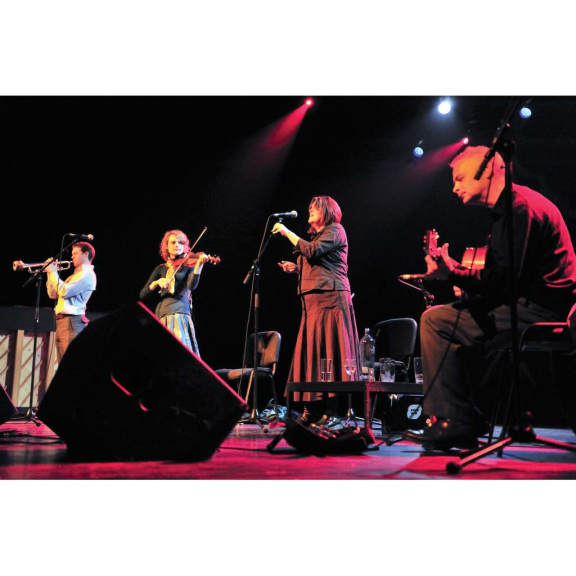 A Fish Feast with folk music? Oh yes, that’s how we roll here in west Wales. The Fish Feast and concert event being held at Small World Centre in Cardigan on Friday, May 29th, from 6pm, will be a great Community Celebration. There will be a delicious fish supper to start and a concert starring Welsh folk band Fernhill to follow.

A feast of locally caught and barbecued fish and fish dishes starts the Fish Feast and Folk night at Small World Centre in Cardigan on Friday, May 29th, at 6pm.

The results of a feasibility study into setting up a Fish Market in Cardigan will be given by 4CG, and Small World Theatre will screen a short film about fish and fishing made with children from Cardigan Primary School as part of a project funded by the European Fisheries Fund for Wales.

Fernhill will be on stage from 8pm to play their beautiful folk music, which is loved by audiences across the world. Their most recent CD ‘Amser’, which was launched at Small World last year, has gained them many new fans and critical acclaim.

Central to their lovely sound is the beautiful voice of Julie Murphy, who has been described by Time Out as ‘a must hear, must see singer’ and who has recorded with music legends like Robert Plant and Danny Thompson.

The band’s guitarist Ceri Rhys Matthews is also a fine piper and flute player, and trumpet player Tomos Williams contributes massively to Fernhill’s sound. Bringing her own exciting energy to the group is Christine Cooper, a fab folk fiddler from Tenby.

Food has to be pre-ordered. More information and tickets available here

Discover more events in the Cardigan and Teifi Valley here