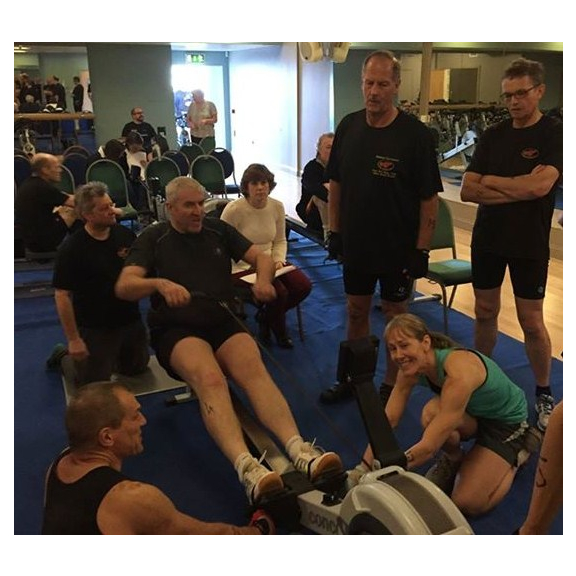 Delighted rowers from across the UK converged on The Shrewsbury Club to become world record breakers.

Organised by Giles Clarke, a member at The Shrewsbury Club on Sundorne Road, the team of rowers smashed the existing world indoor record for the large team 100,000 metres event for men aged between 50 and 59 by nearly an hour.
The previous record, set by a French team in 2007, had stood at six hours 22 minutes and eight seconds, but the time clocked by the team in Shrewsbury was a stunning five hours 28 minutes and 15.3 seconds.
"The facilities were ideal and made breaking the current record that much easier," said Giles, the delighted organiser. "The record is 53 minutes faster than the old one so it was a most successful day."
The record breaking team who joined forces so impressively at The Shrewsbury Club are all members of the Sub7 Indoor Rowing Club, a virtual rowing club for indoor rowing.
It was made up of 17 rowers who rotated at one minute intervals on one machine until 100,000 metres were completed.
Team members included another member of The Shrewsbury Club, Hugh Elliott, plus a fellow local in Richard Steventon.
The others travelled from as far afield as Newcastle, Sussex and Salisbury with James Hawrylak even flying in from Japan to combine the world record rowing attempt with a business trip.
It was the first time most of the men had met each other let alone rowed as a team.
More