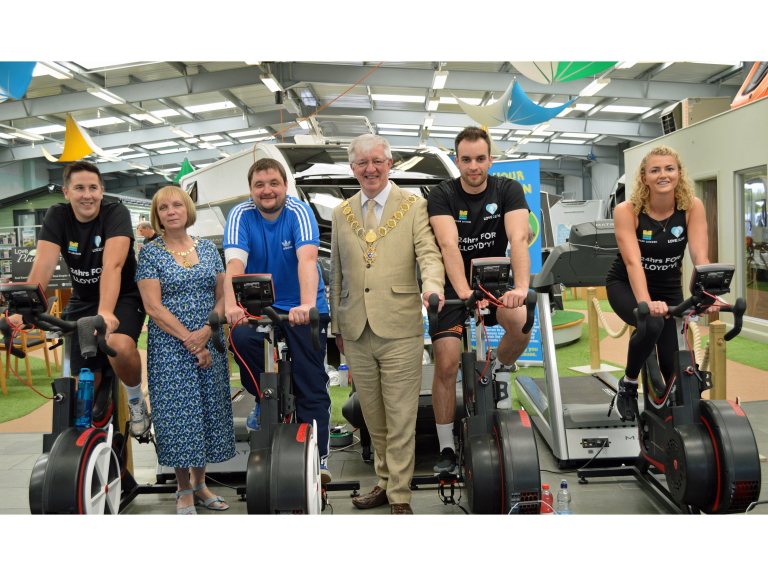 Shropshire workmates and supporters cycled and ran 1,333 kilometres on a 24-hour duathlon at the weekend to raise money for a popular colleague who is bravely fighting terminal cancer.

Around 20 work colleagues, members of Love2Live gym and friends of Darren joined in to support the trio during the marathon, held at Salop Leisure’s Emstrey headquarters. They pedaled and ran a combined the equivalent distance from Shrewsbury to Mont Blanc in France.

Customers, work colleagues and friends popped in during the day to bring food and drinks for the trio and to donate money in collection buckets, which amounted to more than £700.

Shrewsbury’s Mayor Councillor Phil Gillam was there to start the duathlon and even contributed a kilometer or two on one of the exercise bikes.

“This duathlon is awe-inspiring,” he said. “These guys are doing a fantastic thing for such a good cause. Having spoken to Salop Leisure’s chairman Tony Bywater, I get the sense that it’s a really good company that looks after its people.”

Darren, members of his family and Mr Bywater were there to congratulate the trio when they completed the exhausting duathlon to applause at noon on Sunday.

Mr Bywater thanked everyone who had supported the event and praised the trio for their fitness and endurance.

Ed Glover said: “It was an amazing achievement and probably the hardest thing I have ever done, but it’s for a great cause. There was a certain point through the night where I literally didn’t know where I was, but it definitely helped having people come in with food and drink to keep us going.

“Highlights for me were Lloydy doing the first 30 minutes on a bike at the start and people coming in throughout the day which ensured we were never alone. Lloydy was overwhelmed at the end and couldn’t believe we had done it for him.

“A couple of families staying at Love2Stay did a collection around the resort and brought in £220 for us, which was great. We would like to thank everyone who supported us over the 24 hours and continue to donate money through the Just Giving page www.justgiving.com/crowdfunding/lloydy .”

To date, the Just Giving page has surpassed the £3,000 barrier, with money continuing to pour in. Salop Leisure is hoping to raise £5,000 to send Darren on a family holiday abroad, a break at Centre Parcs in the UK, a shark fishing adventure and to a top-class boxing promotion.

Darren was diagnosed with bowel cancer this time last year and underwent surgery on Christmas Eve at the Queen Elizabeth Hospital Birmingham. Because the cancer has spread, he is now undergoing a second cycle of 12 weeks of chemotherapy treatment at the Lingen Davies Cancer Centre at the Royal Shrewsbury Hospital.

Remaining totally positive about fighting the disease, he is sharing his story to raise awareness of the importance of seeking early medical advice as symptoms of a possible illness are noticed, which includes a change in toilet habits.

He believes his original tumor may have been growing in his bowel for four years before he sought medical advice. Like many men do, he put off going to see his GP and by the time he did seek medical advice, the cancer had spread.

“If I can stop this happening to just one person by encouraging them to get early diagnosis of cancer, then it will have been worth sharing my story,” said Darren, who lives in Monkmoor, Shrewsbury.

“The support I am getting from Salop Leisure, my work colleagues, family and a wide circle of friends is amazing,” he added. “Part of coming to terms with my terminal illness is my wish to help other people and give something back.”

In addition to the duathlon, Salop Leisure is entering a team in Shrewsbury Dragon Boat Race on July 7 called Lloydy’s Love Boat. Depending on medical advice, Darren may be the boat’s helmsman dressed as a hospital patient while the rest of the crew dress up as doctors and nurses. The proceeds raised will be split between the Severn Hospice and he Lingen Davies Cancer Centre.

A month of fundraising events is planned by the company for Darren, including draws for a two-night stay in a glamping lodge at the Love2Stay resort and a luxury hamper, a quiz and a cake sale.