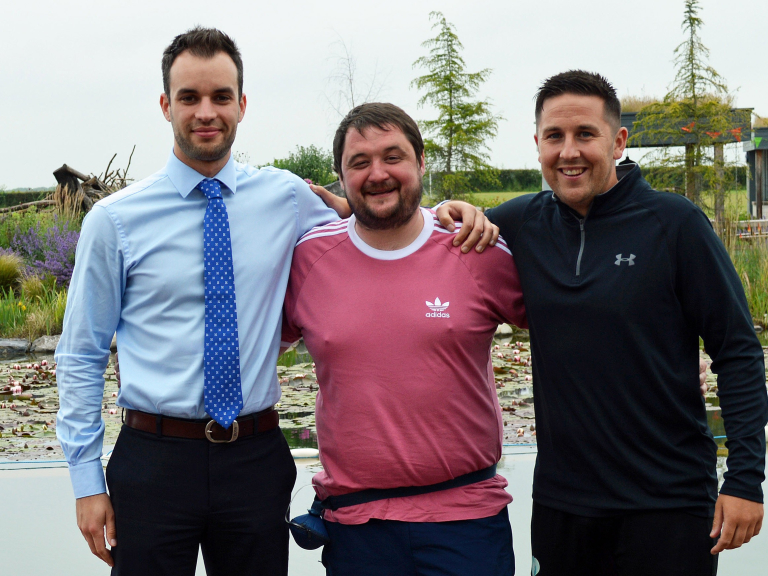 Workmates at a Shropshire leisure company are banding together to raise money for a popular colleague who is bravely fighting terminal cancer.

Shrewsbury-based Salop Leisure is hoping to raise £5,000 to help site maintenance engineer Darren Lloyd, 38, achieve his bucket list of wishes. The list includes a family holiday abroad, a trip to Centre Parcs in the UK, shark fishing and tickets to attend a top-class boxing event.

On Saturday, June 22, the company’s marketing manager Ed Glover and Love2Stay joint general manager Chris Skitt will take on a 24-hour duathlon – cycling and running - at Salop Leisure’s Emstrey headquarters to raise money for the appeal. Work colleagues have also pledged to support the challenge throughout the day.

Darren was diagnosed with bowel cancer this time last year and underwent surgery on Christmas Eve at the Queen Elizabeth Hospital Birmingham. Because the cancer has spread, he is now undergoing a second cycle of 12 weeks of chemotherapy treatment at the Lingen Davies Cancer Centre at the Royal Shrewsbury Hospital.

Remaining totally positive about fighting the disease, he warmly praises the treatment and care he has received from doctors and nurses at the Queen Elizabeth Hospital Birmingham, The Christie in Manchester and the Royal Shrewsbury Hospital.

He is sharing his story to raise awareness of the importance of seeking medical advice as symptoms of a possible illness are noticed, which includes a change in toilet habits.

He believes his original tumor may have been growing in his bowel for four years before he sought medical advice. Like many men do, he put off going to see his GP and by the time he did seek medical advice, the cancer had spread.

“If I can stop this happening to just one person by encouraging them to get early diagnosis of cancer, then it will have been worth sharing my story,” said Darren, who lives in Monkmoor, Shrewsbury.

“I had been having stomach cramps 20 minutes after eating for a long time before I was persuaded to go to the doctor. I wish I had gone sooner. I am trying to keep a positive mind for chemotherapy even though it makes me very tired. I fear that if I get down, it is going to get me.”

Darren, who has worked for Salop Leisure for eight years, has been responsible for landscaping and park design at the company’s Love2Stay resort in Shrewsbury and holiday home and touring parks across Mid Wales.

“The support I am getting from Salop Leisure, my work colleagues, family and a wide circle of friends is amazing,” he added. “Part of coming to terms with my terminal illness is my wish to help other people and give something back.”

His kindness and bravery persuade Ed and Chris to take on the duathlon. They said: “Since being diagnosed with cancer in 2018, Darren has fought the disease with immense strength and belief, at the same time being there for his family and friends.

“We want to raise as much money as possible for Darren and his family to be able to enjoy some precious time together to create some special memories. They have a wish list and they would like to make as many of these possible as they can.

“Please donate any amount you can to help us make these dreams come true for someone who truly deserves it.”

A Just Giving page has been created for anyone wishing to support the fundraising for Darren: www.justgiving.com/crowdfunding/lloydy . More than £1,300 was donated within 24 hours.

In addition to the duathlon, Salop Leisure is entering a team in Shrewsbury Dragon Boat Race on July 7 called Lloydy’s Love Boat. Depending on medical advice, Darren may be the boat’s helmsman dressed as a hospital patient while the rest of the crew dress up as doctors and nurses. The proceeds raised will be split between the Severn Hospice and he Lingen Davies Cancer Centre.

A month of fundraising events is planned by the company for Darren, including draws for a two-night stay in a glamping lodge at the Love2Stay resort and a luxury hamper, a quiz and a cake sale.

Mark Bebb, Salop Leisure’s managing director, said: “We are determined to try and make the time that Darren has left the best it can be for him and his family. He’s a very popular team member who has been an integral part of building and developing the Love2Stay resort and many of our parks in Mid Wales.

“It’s a reflection of the man that even now he is thinking of others by agreeing to share his story about fighting cancer.”