Marcus Willis was a man in a hurry as he became the first player to book his place in round two of the $15,000 Aegon GB Pro-Series at The Shrewsbury Club. 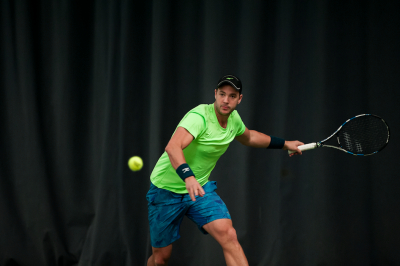 Marcus Willis in action during his first round victory at The Shrewsbury Club. Picture by Richard Dawson.

Elsewhere, it was a day to remember for British teenager Ryan James Storrie, 18, handed a wild card for the tournament, as he brilliantly claimed the notable scalp of Belgian player Clement Geens, the number two seed and ranked 287 in the world, coming from behind to win 4-6, 7-6, 6-3.

Joel Cannell, a British qualifier, also nearly pulled off a big upset before losing narrowly in a third set tie break to Belgian Germain Gigounon, the relieved No 1 seed.

Willis, whose profile has rocketed since reaching the second round at Wimbledon last summer, impressed in front of the BBC Midlands Today cameras as he eased through 6-2, 6-4 against French prospect Ronan Joncour.

Willis, 26, will now meet American John Lamble, a first round conqueror of Brit Neil Pauffley in straight sets, in the last 16 at the Sundorne Road venue today.

“I played well, above average, which is good,” said Willis, seeded five for the tournament. “There’s things to work on, but overall it’s good to get the win.

“I got put under a bit of pressure, but came through it, so that’s the main thing for me.”

Willis, who reached the semi-finals of a similar tournament at Tipton last week, was beaten in the 2013 Aegon final at Shrewsbury by Dan Evans.

He’s now looking forward to what he hopes will be another productive week in Shropshire.

He said: “It would be ideal to win it, but every tournament I enter now, I believe I can win. I also believe I can lose to anyone here because the level’s good.

"I’ve got to keep my head down and take it a match at a time.”

There was first round disappointment for fellow Brit, No 3 seed Lloyd Glasspool, as he made an early exit.

Glasspool, who was watched from The Shrewsbury Club balcony by his tennis star girlfriend Heather Watson, was edged out 7-5, 7-6 by German Tobias Simon, a player ranked nearly 200 places lower.

Today's second round action starts at 10.30am with admission free throughout the week.