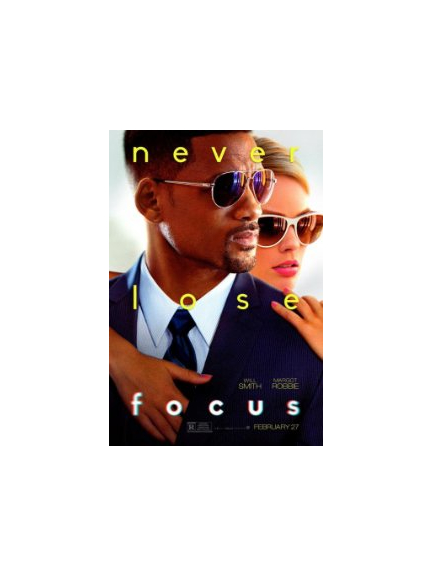 Focus, which stars Will Smith as a master con man and Margot Robbie as his new apprentice.

Alas, this is merely a setup, as the film’s second half eventually reveals that it’s all been a facade.

He plays along out of curiosity, then takes pity and after a bit of persuasion from Jess, Nicky playfully educates her in the art of the psychological grift. I

t is one of many remarkable scenes that directors Glenn Ficarra and John Requa shoot in a very straightforward manner, taking advantage of the obvious beauty right in front of them.

This is a trick they use to great effect throughout the film and the result is you really want to put on your best clobber, go on an exotic holiday and join them driniking wine. Pure, visual escapism at its best.

The hotels and high-end clubs in Focus are extraordinarily furnished, and Smith and Robbie look splendid gallivanting among them. They are both terrific in this, especially relative newcomer Robbie who shows tremendous comedic range - she is as appealing and easy to watch as an actress as she is beautiful. And the chemistry between these two just works.

The film’s action soon heads to New Orleans where a “big football game” has brought out all the town's easy money.

Jess fits in nicely with Nicky’s crew of conners as they bop around the French Quarter pilfering wallets and watches from the crowd in what looks like the most well orchestrated pick-pocket spree of all time!

Then the twist comes and Nicky manipulates Jess into helping him pull off an enormous (and, admittedly, ludicrous) con inside the Superdome.

After a “three years later” card we meet up with Nicky in Buenos Aires as he starts planning a con involving a car race. He isn’t trying to steal, but to infiltrate an opposing team and slip them 'something' that will lead them to think they have an edge, but will actually do just the opposite. It’s a little confusing (don't lose focus) and gets more so when characters from the past keep showing up.

This was a very enjoyable way to spend a Friday night and let a few hours of big screen cinema spectacle wash over you. Recommended!