A young accounts assistant from Shrewsbury has used pedal power to raise more than £2,200 for Prostate Cancer UK by cycling from London to Amsterdam.

Will Butler, 22, who works for Shrewsbury-based Salop Leisure, put his name forward when Shrewsbury Town Football Club appealed on social media for fans to support the annual 'Football to Amsterdam' challenge.

The cycling event, which is supported by The Football League and the League Managers Association, had starting points in London and Barnsley.

Keen cyclist Will, who cycles around 50 miles a week, took up the 160-mile challenge from the Olympic Park's Velodrome in London to Amsterdam and was joined by around 300 other fans from Football League clubs across the country.

He was one of four riders representing Shrewsbury Town and surprised himself by completing the challenge in around 10 hours. On the first day, he rode 95 miles from London and Harwich followed by 65 miles between Hook of Holland and Amsterdam in a heatwave next day. 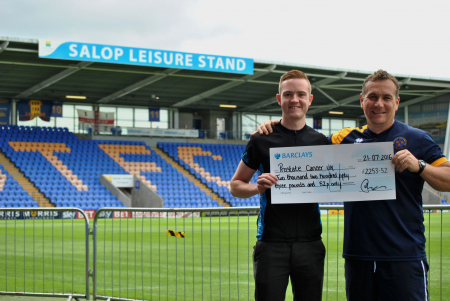 His fundraising was boosted by holding a quiz night at the Greenhous Meadow Stadium and he also received generous support from family, friends and work colleagues at Salop Leisure, who helped him collect £2,253.52, which was far more than he expected.

“It was the first time I had done something like this for charity and I really enjoyed it,” said Will. “I am proud and humbled by my achievement, as I did better than I thought I would. I have already put my name down for next year’s ride and will possibly extend the weekend and put more miles in.”

Since the event started in 2012, more than £1 million has been raised for Prostate Cancer UK, the UK's leading charity for this disease.