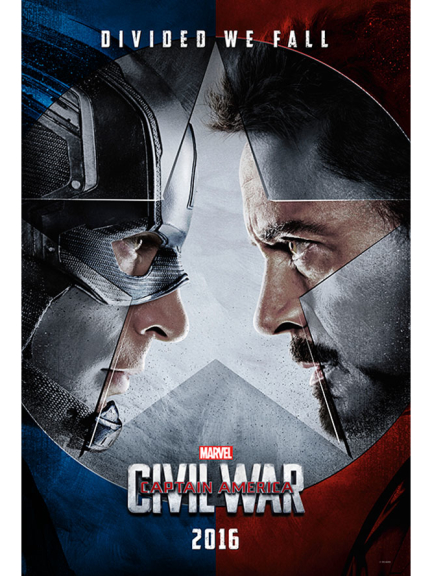 The latest film set in the Marvel universe was released last Friday and this week we caught it at Cineworld Shrewsbury. Suffice it to say, it blew our socks off.

Captain America: Civil War is the third in the Captain America trilogy, and a direct sequel to the second Avengers film, Age of Ultron. Directed by the Russo brothers (who also directed Captain America: The Winter Soldier), it’s a star-studded epic with depth, intrigue and just a pinch of good old-fashioned silliness.

Following on from where the story left off

The film picks up on the events that took place in Age of Ultron, when the Avengers gained new team members Scarlet Witch and Vision and defeated the artificial intelligence Ultron at the battle of Sokovia.

Now, prompted by the destruction and death caused in the previous Avengers films (the Hulk isn’t the best poster boy for a responsible superhero) the United Nations comes to the Avengers with a deal – either work for the nations of the world under a system of accountability or be treated as vigilante criminals.

While Tony Stark is quick to agree, Steve Rogers is apprehensive. What if the UN doesn’t let them fight some battles, or sends them somewhere they don’t want to go? The team divides into two factions – those who agree with Iron Man and those who agree with Captain America and with that, the civil war begins.

The men behind the masks

All the familiar faces are back, with the notable exceptions of Thor and the Incredible Hulk. You really won’t miss them, because there are so many appearances from other heroes, such as the introduction of stoic Black Panther and motor-mouth Spider-Man.

Chris Evans and Robert Downey Jr do a particularly fantastic job as Captain America and Iron Man, the two giants of the superhero world who come to clash over the issue of whether heroes should become the world’s soldiers or be allowed make decisions themselves.

There’s a general consensus between us that this is better than the last Avengers film. As well as containing stunning action sequences, this film is actually pretty thought-provoking, raising issues like individualism, loyalty and the consequences of your actions.

As Spidey’s Uncle Ben always said, with great power comes great responsibility, and we get to see characters with incredible strength and telekinetic powers make tough choices about what it means to be super. All this is held up for discussion, without losing any of the bright, cheesy fun of comic book superheroes.

If you’re not a fan of Marvel or superhero films you might find that some of the references go over your head. There are a lot of characters packed in, each with their own backstory, unique gimmick and some (like Ant-Man) even have their own films, so there’s a bit to keep track of. That being said, the writers do a great job of combining all these stars and personalities into the two and a half hours – which sounds long but really flies by.

Even if some things are lost on you, it’s still a hugely fun ride handled with the kind of sleek competence and high energy we’ve come to expect from Marvel’s studios.

If you’re up for a thrilling and thought-provoking visual spectacle, we highly recommend seeing Captain America: Civil War at Cineworld Shrewsbury as soon as you can!