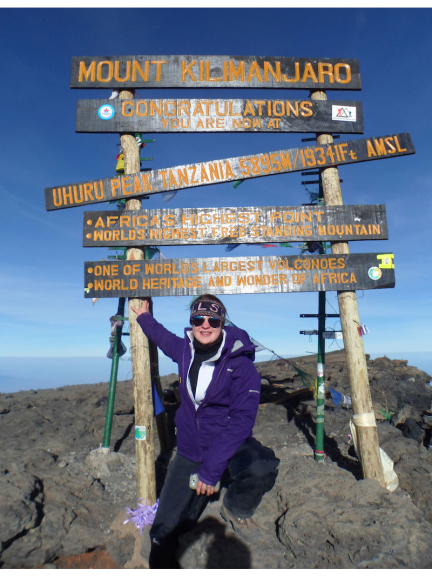 A young Shropshire woman’s taste for adventure has taken her to the peak of Mount Kilimanjaro, Africa’s highest mountain and to base camp on Mount Everest.

Next up for Sophie Ratcliff, 22, from Shawbury, is the Three Peaks Challenge next year and she would also like to follow the Inca Trail in South America.

What makes her wanderlust even more remarkable is that she set out from Shropshire on the recent challenge to conquer Mount Kilimanjaro alone. The climb was organised through specialist tour company G Adventures and, whilst out in Tanzania, she teamed up with four Americans.

“I just like doing these challenges,” said Sophie, who’s an accounts assistant at caravan and motorhome dealership Salop Leisure in Shrewsbury. “It was something that I decided to do and just did it.

“I also went on my own, as part of a tour, to climb to Everest base camp when I was 17, five years ago.”

Reflecting on her most recent adventure, she said she found the five-day trek easy until the final stages when altitude sickness – nausea and headaches - started to kick in.

“You walk all day, get to bed for a few hours and then you start walking again at midnight,” she said of the final assault on Mount Kilimanjaro summit. “It’s easier to walk on frozen ground and, psychologically, it’s probably better that you can’t see the huge, steep climb awaiting you.

“It took six-and-a-half hours to reach the summit and it was phenomenal. We got to the top just as the sun was rising and you could see the curvature of the earth. Out of the group of Americans that I was with, one of them didn’t make it to the top, unfortunately due to altitude sickness.”

Having run a marathon and half iron man triathlon, she is keen to tackle the Three Peaks Challenge next year.

She says she inherited her wanderlust from her dad, Fred Ratcliff, who recently retired as transport manager with Shropshire Council.

Now safely back at work at Salop Leisure, she is working towards qualifying as an accountant, having recently achieved the Association of Accounting Technicians (AAT) level three qualification. She’s also half way through studying for a mathematics degree through the Open University and plans to progress to a level four accountancy qualification.