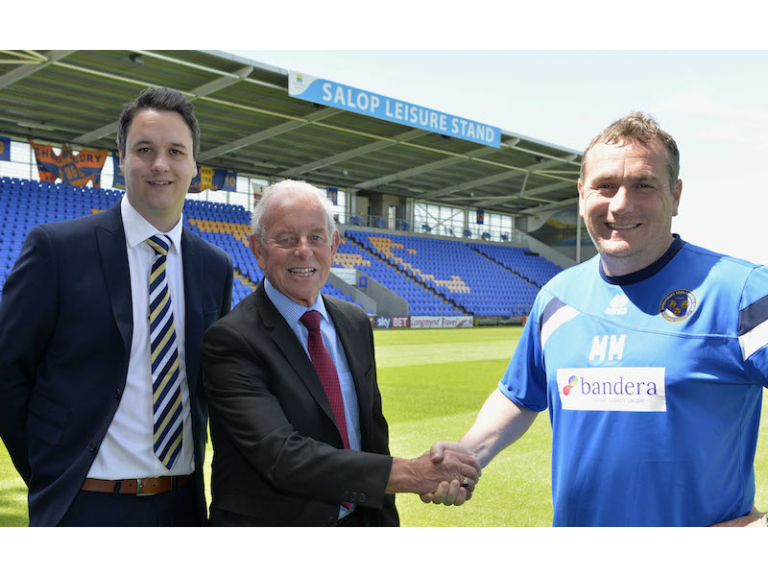 One of the country’s best-known caravan dealerships has given Shrewsbury Town Football Club a vote of confidence following promotion to the Sky Bet League One.

Salop Leisure, which is based at Emstrey, Shrewsbury, has renewed its sponsorship of the South Stand at the club’s impressive Greenhous Stadium and is looking forward to the new season with great optimism.

The south stand carries branding to promote the company’s name and its marketing slogan ‘Go Explore!’.

“We are proud to be associated with Shrewsbury Town Football Club and its fantastic stadium,” said Salop Leisure’s chairman Tony Bywater. “The renewed sponsorship agreement will help to promote Salop Leisure to both a local and national audience as well as supporting the club.

“I think the football club is, without doubt, the best marketing tool for Shrewsbury because the town is in the national news every week and on tv. The club brings a large number of people to our town during the football season, many of whom stay for the weekend and boost the local economy.

“We think that the club is going to have an exciting season in Division One where they will play some big teams, which have a great following. I am sure our home gates will increase dramatically in the new season.

“The club is being run extremely professionally by everyone from the chairman Roland Wycherley to the manager Micky Mellon and his team.”

Salop Leisure, one of Shrewsbury’s longest established companies, celebrates its 50th birthday in 2016. The company, which employs 140 staff, also has sales centres in Machynlleth and Stourport-on-Severn.