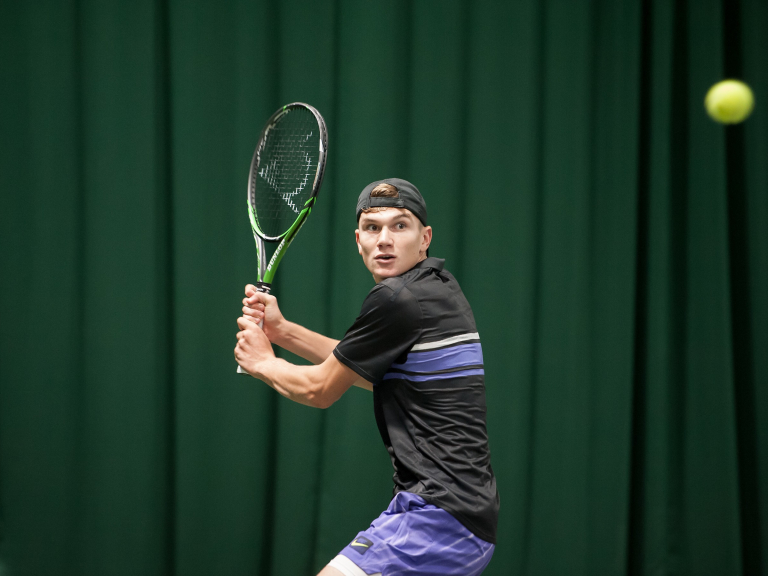 Rising star Draper, 17, who reached the boys’ singles final at Wimbledon in 2018, was pleased to progress 6-2, 6-4 as he targets a successful week at The Shrewsbury Club.
He will now face Sean Hodkin, who received a main draw wild card for this week’s event, after his fellow Brit got the better of higher ranked Julius Tverijonas from Lithuania in three sets
Draper said: “I didn’t probably play my best tennis. Last week in Glasgow, I picked up an injury in my groin, so this is one of the first days I’ve got back hitting again.
“To play a match straight off is not easy and Alex played a good match - he makes a lot of balls, makes life difficult for you.
“I was trying to play the right way, trying to get forward a lot. My serve probably wasn’t up where I wanted it to be, but it will come and it’s just the start of the first match and it will start to get better.”
Draper, currently 335 in the world rankings, won two similar ITF events to this week’s Shrewsbury tournament at Roehampton and Chiswick in August - and his aim is to add further titles and keep progressing.
He added: “In any tournament, if you’re going to play a tournament, you’re going to aim to win the tournament and that mindset never changes.
“I’m looking forward to the matches ahead and see what I can do.”
Draper is pleased with how 2019 has gone following a frustrating start to the year owing to injuries.
"The first six months I didn’t really play at all up until Wimbledon because I had a few injuries,” he said. "I broke my finger and did a couple of other things, but since then I’ve just been trying to get as many matches under my belt as possible and just try and finish the year strong.”
Elsewhere, third seed Aidan McHugh, the promising Scottish player mentored by Andy Murray, had to retire owing to injury in the second set against Arthur Fery. McHugh took the opener 6-4 and was trailing 6-5 in the second.
Fery, one of the Brits handed a main draw wild card, will meet British qualifier Felix Gill, who beat Jonathan Binding, in round two.
Seventh seed Luke Johnson, another of the Brits in action in Shropshire this week, beat Croatian Josip Krstanovic 6-1, 6-4.
A second round meeting awaits with Anton Matusevich, who reached the boys’ singles quarter-finals at Wimbledon this summer, and was a 6-4, 6-4 winner against Sizya Ernest Kivanda 6-4, 6-4 yesterday.
There were also first round wins for seeded players Julian Ocleppo, Robert Strombachs, Simon Carr, Tobias Simon and Francesco Vilardo, the eighth seed from Italy, who recovered from losing the opening set to beat British wild card Clay Crawford.
Fifth seed Carr, from Ireland, will meet Finn Murgett, another of the Brits handed a main draw wild card, after Murgett overcame Adam Jones.
Today’s second round matches start at 10am, with admission free for spectators throughout the week, including Saturday’s singles final.