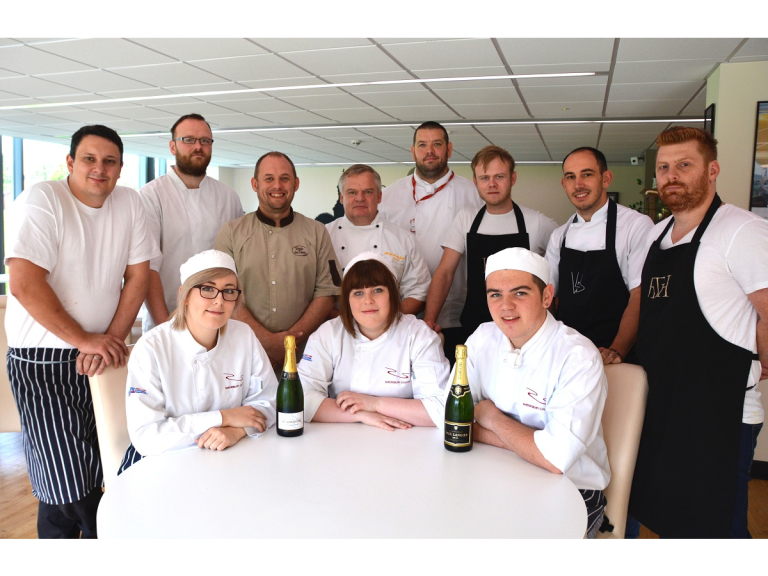 Seven head chefs from across Shropshire will be joining forces to cook a course each as part of a special charity gala dinner at Shrewsbury College next month.

The chefs are: Michel Nijsten from the Albright Hussey Manor Hotel, Gennaro Adaggio from La Dolce Vita, Chris Conde and James Sherwin (Chef de Partie) from Henry Tudor House (all Shrewsbury), Karl Martin from Old Downton Lodge, Andrew Birch from Fishmore Hall (both Ludlow) and Shrewsbury College chef lecturer Dan Gibbons will also be cooking on the night. Master Baker Rob Swift from Swifts Bakery in Ludlow, will be preparing all the complimentary breads and canapés.

The event came about after Mr Swift, who had been working with Headway at their centre in Shropshire, decided he wanted to do something to support the charity. The charity provides care, support and rehabilitation to people with acquired brain injuries within Shropshire, Telford, Wrekin and the surrounding areas. Mr Swift had been running cooking and baking workshops with the users, showing them how to make simple dishes.

He said: “I realised the charity is completely dependent on raising funds themselves to get through each year and it’s all down to the hard work of a few people working really hard for not a lot, so I wanted to do something to help. I called up some of my chef friends from around the county and asked if they would like to be involved in an event. Luckily they said yes and we are now planning a seven-course dinner, to be held at Origins Restaurant at Shrewsbury College on 12 October.”

The College’s Hospitality and Catering students will also be involved in the project, overseen by Dan Gibbons. Each head chef will have a student as a commis chef, chosen by Dan as part of the College ‘culinary team’.

Dan said: “This is an amazing experience for our students. We value giving them real-life opportunities and the chance to work alongside some of the best chefs in the county is one not to be missed. The learning curve will be amazing. The students will be working really hard in the next few weeks in the hope of gaining a place alongside the chefs. But all of our students will get the chance to be involved in the kitchen and restaurant. As a dining experience for our guests we can promise them the chance to enjoy amazing food including seasonal local produce prepared by a host of top chefs, and a closed auction featuring prizes and experiences through the chefs, all while raising money for an excellent cause. ”

Following the event, each chef will be returning to the College to run master-classes with the students, including a bakery masterclass, experimental/artistic cooking workshops, and foraging on a county estate.

In addition to the event, Shropshire-based Middle Farm Press will be publishing a book that includes recipes that the chefs are devising. It will be a user-friendly, fresh, well-designed and high-quality book that also includes recipes from Shrewsbury College students and the community as a whole. A call has already gone out to the community and people can submit their ‘five-ingredients-only’ recipes to Headway at myrecipe@headwayshropshire.org.uk

Kate Taylor, Director of Middle Farm Press, said: “This project brings together a great charity, some amazing chefs, several local establishments as well as the general public. It doesn’t get more community-based than this! We’re thrilled to be a part of it and will be pulling all of this hard work together to make a fantastic book that will appeal to everyone.”

Tickets for the Headway Charity Dinner cost £50 for dinner and £25 for wine per person, with a hand-picked glass to accompany each course. They can be purchased and paid for by calling Origins Restaurant on 01743 342611.