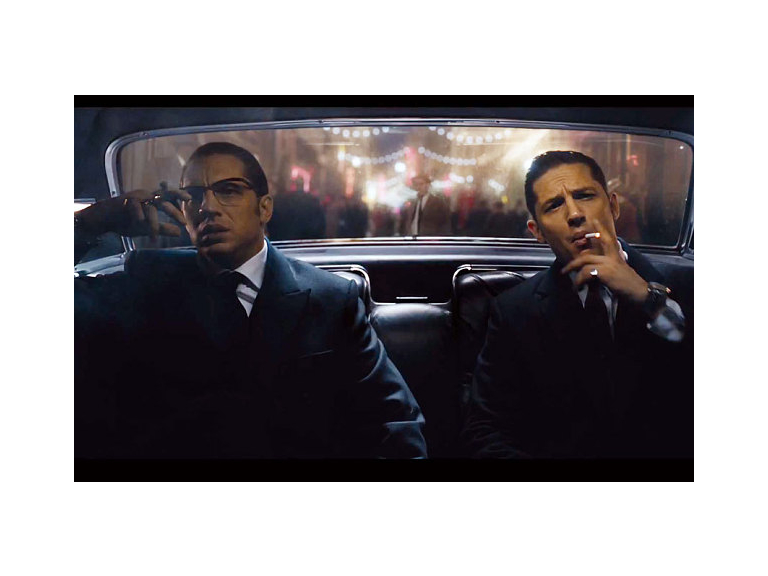 The charismatic Hardy is a tour de force as both handsome tough guy Reg and psychopath tearaway Ron, carrying a tale of the brutal London gangster twins.

One is supposedly the smart rational gangster and the other his psychopath tearaway sibling, whose deranged behaviour helps bring the whole empire crashing down. They have become pop-culture, almost 'national hero status' figures of the 60s East End of London crime scene.

The brutal and smug criminals Reggie and Ronnie Kray became a joint legend – as this film’s title boldly puts it – thanks to two crucial mythologising moments: the photographs David Bailey took in 1966 and the extremely readable book John Pearson wrote in 1969: The Profession of Violence, on which this film is based. These men’s personal contributions are not included, and the film is narrated and somewhat told through the eyes of his wife Frances played by Emily Browning

Tom Hardy plays both twin brothers with aplomb. Getting the same actor to play both is to insist emphatically on the eerie same-yet-not-the-same effect.

Hardy gives it some serious welly as Reg and Ron, not afraid to go right over the top. Spit eminated from his Ron's mouth quite often as he spits his words on several occasions and his charisma and muscular style carry what might otherwise be a rather 'geezery' film. His Reg is a (VERY, VERY) handsome tough guy, with a confident walk- as demonstrated in the opening scenes as he makse small talk with his very own coppers.
Ronnie is the scary weirdo. Totally the opposite, hard to control, but he must have been fun to play.

But we see that Reggie, can be is pretty scary himself. On a couple of occasions, the sweet and loving side of Reg is bannished. When in prison, he pickpockets a rather stupid guard’s cuffs, shackles him to the bars and beats him up. (Not until after his face is virtually pulp of course.)

Among their scowling and cringing crew, David Thewlis is excellent as the twins’ testy front man and accountant Leslie Payne, driven to distraction by Ronnie wilfully endangering everyone’s lovely little earner with his violent antics.

Legend is on strong ground when it takes you through the macabre success of the Krays’ early prominence, and their bizarre high-life connections with House of Lords toffs like rough-trade enthusiast Lord Boothby. The only problem is that the worse things get, the more we are locked into the Krays’ own miserable and resentful world and the impending doom that their success and way of life can't last.

The showstopper, of course, is when Reggie and Ronnie have to fight each other: and Tom Hardy gives us a punch-up which is quite black comedy as really - they don't want to inflict serious damage on eachother being half of the same person.

Hardy always gives it 200% and you really end up rooting for Reggie as he is juxtaposed against his schizophrenic, psycopath brother. And I found myself feeling really sad when it starts to unravel for him, as it has with his twin. This is a brilliant film and it has made me and unapolagetic Hardy fan.

Catch it now at Cineworld Shrewsbury.

A Right Royal Week of Fun at Park Hall

The Hive's Street Festival 2022
Sign up for offers
Sign up for what's on guide
Become an author
Popular Categories
By clicking 'ACCEPT', you agree to the storing of cookies on your device to enhance site navigation, analyse site usage, and assist in our marketing efforts.
For more information on how we use cookies, please see our Cookie Policy.