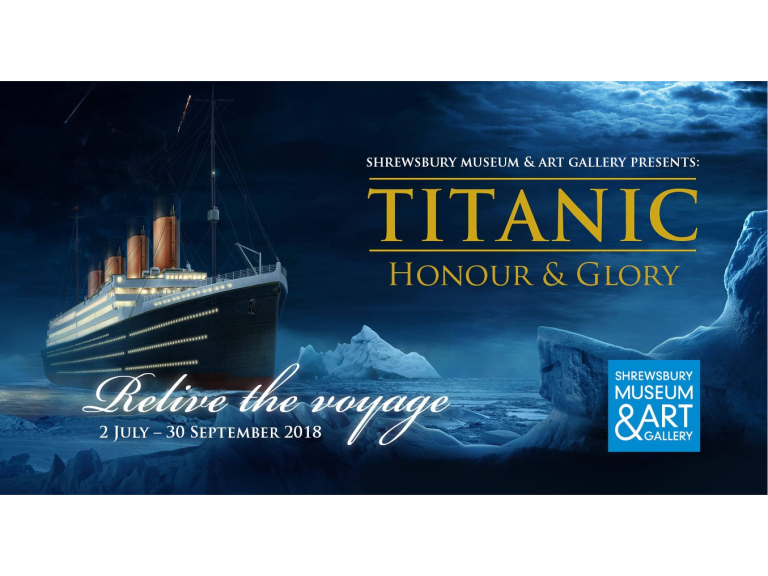 Discover and experience the story of the world’s most famous ocean liner this summer at Shrewsbury Museum & Art Gallery in the latest special exhibition, Titanic: Honour & Glory.

Open from Monday 2 July 2018, Titanic: Honour & Glory allows and encourages you to delve further into the great ocean liner’s history and personally come face-to-face with its incredible story.

From her conception to her premature demise, the legend of Titanic continues and is expertly portrayed through many rare and previously unseen awe-inspiring artefacts from the ship itself and props from the hugely popular James Cameron movie.

Once you are immersed in the history of Titanic, you can recreate the famous Leonardo Di Caprio and Kate Winslet moment on the brow of the ship on the Balcony overlooking the Shropshire Gallery.

As well as Titanic, this exhibition preserves the history of the White Star Line to which the famous ocean liner belonged, allowing you to experience and engage with Olympic and her lesser known sister ship, Britannic and the fleet of ships that once sailed under the distinctive swallow-tailed flag of the legendary White Star Line.

“As we approached 2018 we knew it promised to be a year of blockbuster exhibitions. Firstly with Brick History, which was a huge success, and now we’ve got Titanic: Honour & Glory to look forward to!

“Public fascination in Titanic is unprecedented and no doubt helped by the James Cameron film. From all cultural and ethnic backgrounds, every age group across the world wishes to delve further into its history and learn more. I can’t wait to have a look and relive the voyage and I’d encourage everyone to visit not just this fascinating exhibition, but the fantastic galleries throughout the Museum.”

Titanic: Honour & Glory was established in 2002 and has been visited over 2 million times across the world.

In 2015, Titanic: Honour & Glory was ranked as one of the top five exhibitions in the UK by the prestigious Times newspaper rankings.

“Titanic was the largest maritime disaster of her time, a disaster with a tremendous loss of life, which shook the world in 1912.

“With the exhibition we aim to increase the knowledge of Titanic’s history and that of her sister ships and the White Star Line, which owned and operated many of the finest liners ever to sail the high seas. Each visitor will experience what it was like to have been aboard Titanic, the opulence, luxury and the ultimate survival during the tragedy.  The exhibition will take you on a genuine voyage of discovery, bringing history to life where the past is always present.”

This exciting exhibition will be open at Shrewsbury Museum & Art Gallery until Sunday 30 September 2018.

For more information about what’s on at Shrewsbury Museum & Art Gallery, click here

World Tennis Tour to return to The Shrewsbury Club next month

How to switch internet providers
Sign up for offers
Sign up for what's on guide
Become an author
Popular Categories
By clicking 'ACCEPT', you agree to the storing of cookies on your device to enhance site navigation, analyse site usage, and assist in our marketing efforts.
For more information on how we use cookies, please see our Cookie Policy.