Every year, technicians at the Shrewsbury-based company are called upon to resolve a range of problems relating to the storage of touring caravans, which could have been avoided.

With frosty weather expected soon, Salop Leisure has issued essential advice for owners on how to keep their tourer in tiptop condition during winter hibernation.

The company is also advising caravan holiday home and luxury lodge owners to drain water systems when they are not in use during the winter to avoid frost damage.

Here are the company’s storage and security tips for touring caravans:

“Our after sales department offers full advice on the best way to winterise a touring caravan,” said Viv Jones, Salop Leisure’s after sales manager. “I would also advise customers to book their service as early as possible to ensure work is properly carried out in readiness for next year’s caravanning season. 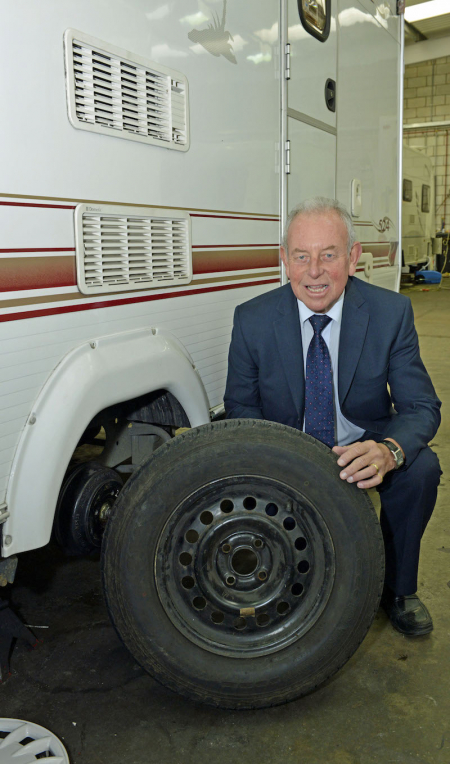 Viv Jones, Salop Leisure’s after sales manager, checks a tyre on a touring caravan prior to winter storage.

“Some people put away their touring caravan and often don’t give it a second thought until the day before they want to use it. Our advice is to start preparing for your caravan holiday well in advance.

“Touring caravans give so much pleasure to families but it’s essential that they are stored securely and serviced every year before they are reused. Time spent on storage and security this winter will pay dividends next spring.”

Salop Leisure is now able to provide a complete service to touring caravan and motorhome owners, having opened a secure storage facility at the company’s Emstrey headquarters.

The facility is covered by closed circuit television, has an alarmed barrier fence and is governed by a secure electronic entry system. Each touring caravan or motorhome stored at the facility is given a dedicated pitch and owners are allowed access at any time during daylight hours.

Anyone needing advice about caravan storage or servicing can contact the company on Tel: 01743 282400.