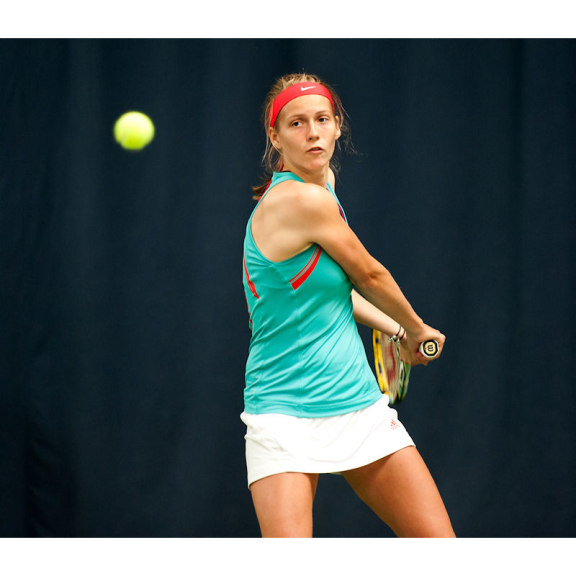 Shrewsbury tennis star Lauren McMinn is set to climb the world rankings ahead of the Aegon GB Pro-Series tournament in her home town later this month.

The 21-year-old is waiting to find out who she will face in the first round of the Aegon GB Pro-Series event in Barnstaple when the draw is made later today after successfully coming through qualifying yesterday.

Lauren, who trains at The Shrewsbury Club, impressively beat higher ranked fellow British player Jessica Simpson 6-4, 6-4 to pick up a world ranking point which will lift her from her current standing of 1,222.

Lauren has been playing well recently and her good form is all the more timely given the $25K Aegon GB Pro-Series tournament at The Shrewsbury Club is less than a fortnight away.

Qualifying for the popular event at the Sundorne Road venue starts on Sunday, September 14 and local tennis fans will be treated to a feast of professional tennis action featuring some of Europe's rising stars leading up to the final on Saturday, September 20.

German ace Sabine Lisicki along with current British stars Laura Robson and Heather Watson have all competed in the event in Shrewsbury in the past.

"It's great to hear Lauren has enjoyed a good win at Barnstaple to push her up the world rankings," said Dave Courteen, managing director of The Shrewsbury Club.

"Hopefully she can go further in the competition and we are certainly looking forward to seeing her compete at The Shrewsbury Club where she spends a lot of time and is extremely popular.

"We're very proud of her and enjoyed watching her perform so well in last year's Aegon Pro-Series event at The Shrewsbury Club when she did well enough to gain a world ranking for the first time."

Lauren, from Bowbrook, has no doubts listing last year's event in her home town when she beat Swedish player Malin Ulvefeldt, ranked in the world's top 650, to earn a place in the main draw as one of the highlights of her flourishing career.

"That was a pretty good feeling," said Lauren. "That was probably my best result. Everything sort of clicked after that because you get confidence.

"I beat a girl ranked 530 a few weeks later so it all came together and I got a couple of ranking points in quick succession."

Lauren's focus is firmly on doing well at Barnstaple this week but she admits she is excited at the prospect of playing in a tournament at The Shrewsbury Club again later this month.

She added: "Everyone has been so helpful there. The facilties are amazing for what I want to do. The gym is fantastic and has all the equipment I need. They've got clay courts, indoor courts, so it's great.

"It's one of the nicest places to play. Other girls have gone there for tournaments and then been to other places and sent me texts saying what an amazing place it is to play."