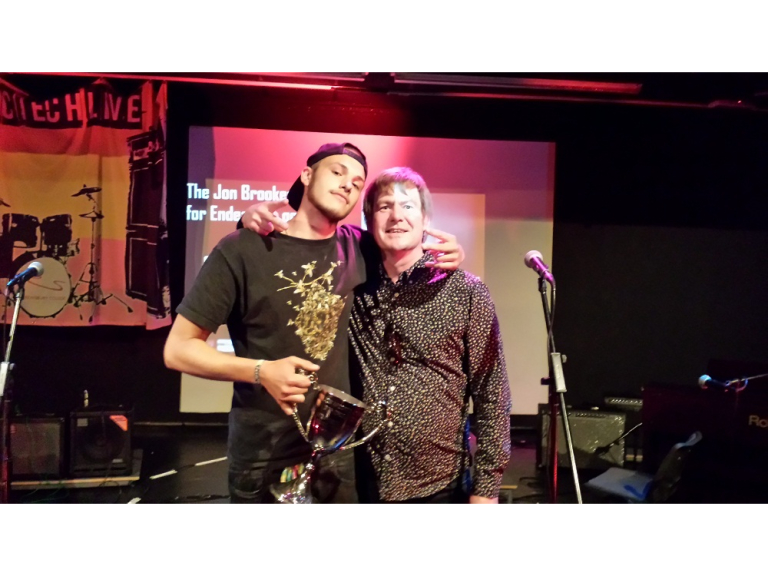 Last night (Tuesday) Music students at Shrewsbury College were rewarded for their efforts at their annual awards ceremony - with one scooping the main accolade named after former Charlatans drummer Jon Brookes.

The Jon Brookes Award for Endeavour was established after Mr Brookes, former drummer with world-renowned British Indie band The Charlatans, became affiliated with the College when he helped to launch its Roland Academy for Music in 2009.

Over the years, he held student workshops focussed on both drumming and working in the music industry as a whole, which included impressive personal demonstrations as well as giving students the opportunity to play alongside him to famous tracks by his band.

In late 2013, Jon sadly passed away from a brain tumour. But his legacy through the College lives on through Martin Blunt, bass guitarist with The Charlatans, who returned to present the award for the second time this year, in honour of his former bandmate.

For the first time since Mr Brookes’ death, his wife, Deborah Hill-Brookes, joined Martin to see the awards being presented and watch performances by students.

Connor said: “I was surprised to win the award but really pleased. The course was a brilliant way for me to learn all the skills I now have. I especially enjoyed the electronic music production side and it would be a great route for anyone wanting to get into music production.”

Other prizes and certificates handed out to students who had achieved a lot and made exceptional contributions to the course this year, as part of the College’s annual Arts & Skills Festival, included:

Speaking at the ceremony, Ian Round, Music Technology lecturer at Shrewsbury College, said: “We chose Connor as the overall winner as in the first year he was a bit disenfranchised and we worked together to improve that. He travels a long way to get here, from near Oswestry, and has developed a real passion for what he does. He is going to Salford University to study Creative Music Production and he has a great career ahead of him. He is a worthy winner.”

Congratulating Connor, Martin Blunt, said: “I am really glad the College is carrying on this award. It’s a great legacy to Jon. He really thought a lot of the College and the students and was inspired by the enthusiasm of young people. The music awards is a great event and I wish Connor the best of luck in his career. It’s a real bugbear of mine that going to university these days is not about the ability to learn, it’s about the ability to pay when some of the best resources this country has are its young people.”

Deborah Hill-Brookes, Jon’s wife, said: “This is the first time I have been here since Jon helped at the College and I really had the urge to come tonight – it was like a calling. I’m so glad they are carrying on this award in Jon’s name. Jon would be elated to see everyone here doing this event. He would also be thrilled that Martin is still supporting the students and I want to thank Martin for coming.”

To find out more about Music courses, including new Higher Education courses which start in September at Shrewsbury College, pop in to the next advice event, on Thursday, 9 July, visit www.shrewsbury.ac.uk or call 01743 342411.