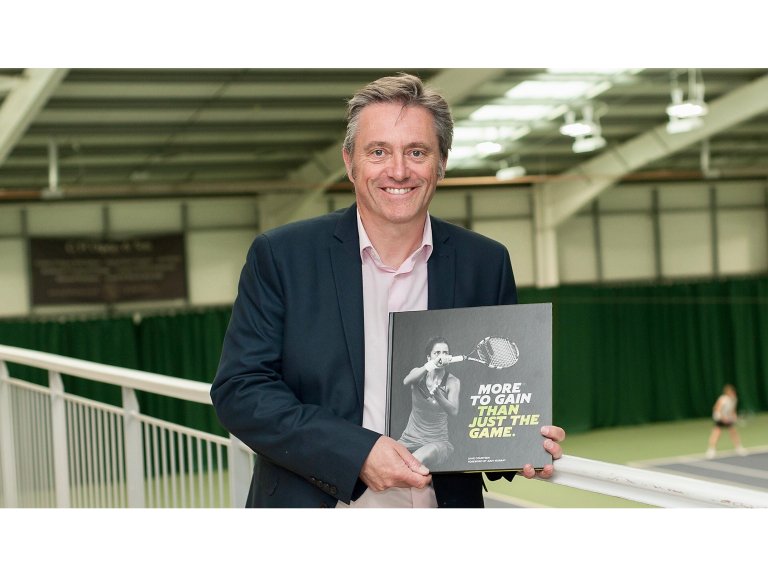 Written by Dave Courteen, the managing director of The Shrewsbury Club, More To Gain Than Just The Game is launched on June 18.
The coffee table book - with the foreword written by Great Britain’s former Fed Cup captain Judy Murray - features seven narratives focusing on how sport challenges and changes people.
Dave was inspired to create the book by the international tennis tournaments hosted twice a year by The Shrewsbury Club.
It’s provided an insight into the world of professional sport, with Johanna Konta and Marcus Willis, who memorably faced Roger Federer at Wimbledon in 2016, among the players featured.
“It has been a year in the making,” said Dave. “The point of the book, as the title suggests, is you get more out of sport than just the fun of playing the game.
“Behind the headlines is an underlying story that cannot get told during the heat of a tournament, but those personal, human stories are as relevant whether you are playing on the tennis tour as a professional player, or if you are someone like me who just likes to play a few club games with friends.
“The idea was to pull those stories together that prove you gain more from sport and tennis than just simply playing the game itself.
“The result is a book which features seven stories woven together that highlight life lessons and teach us how sport can change us from the inside out.”
Dave’s delighted that Judy Murray, who has twice visited The Shrewsbury Club, agreed to write the foreword to a book brilliantly illustrated by the images of Shropshire photographer Richard Dawson.
“Richard takes amazing photographs,” added Dave. “He’s particularly creative and artistic.
“They complement the seven stories perfectly in creating a book which would look good on a coffee table.
"It’s an artful book, in terms of the writing, photography, the layout and imagery, the quality of the paper, and the overall feel of it.
"We wanted to produce a traditional page turning book that comes to life when you are actually holding it.
"It’s not a book that would transfer to a kindle or one that you would want to download. It’s a book that you want to hold in your hand and read.
“We hope that people enjoy the book as much as we have enjoyed creating it.”
More To Gain Than Just The Game, published by Shropshire’s Middle Farm Press, can be ordered by visiting https://www.moretogain.co.uk, with each copy sold having a stamp of authentication.
It is also available via Amazon and from a number of local book shops, including Waterstones in Shrewsbury.