Professional tennis returns to Shrewsbury this weekend - with organisers hoping local tennis will again take advantage of free admission to enjoy the action.

Players from across Europe are heading to The Shrewsbury Club to compete on the indoor courts in the $15,000 Aegon GB Pro-Series tournament. It’s an International Tennis Federation event which often produces stars of the future.

Qualifying for the tournament begins on Sunday morning and the main draw matches get under way next Tuesday. The singles final will be played at the popular Sundorne Road venue next Saturday afternoon, February 18.

A civic reception hosted by the Mayor of Shrewsbury, Councillor Ioan Jones - which will feature the draw for the first round - takes place at The Shrewsbury Club next Monday evening.

Stars of the future

British ace Dan Evans, now up to 45 in the world rankings after recently reaching the fourth round of the Australian Open, won the event in Shrewsbury in 2013.

The British challenge this time is set to be spearheaded by Marcus Willis, who reached the second round at Wimbledon last summer before losing to the legendary Roger Federer, while Lloyd Glasspool, from Birmingham, and a number of players currently ranked in the world’s top 300 are also in line to compete.

Poland’s No 1 Kamil Majchzak could be one to watch while Belgian ace Germain Gigounon is also expected to mount a strong challenge. 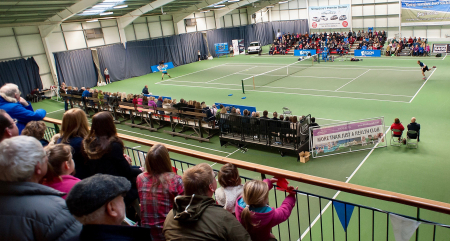 Pictured above: The Shrewsbury Club has developed an impressive reputation for successfully hosting professional tennis tournaments. Picture by: Richard Dawson.

The Wimbledon of Shropshire

Julie Piper, the tournament director for the Lawn Tennis Association, said the players and officials enjoyed visiting Shrewsbury, with the town well regarded on the international circuit after successfully hosting a number of men’s and women’s events.

She added: “It’s always nice to return to The Shrewsbury Club because it is such a good week. The tournaments always go so well and the support we get is fantastic.

“Everyone is made to feel welcome - officials and players - and the fact entry is free makes it very attractive for spectators who continue to support the tournament in such good numbers.

“There will be lots of quality tennis played again and many good players have entered. A number of British players will be taking part and a few more are likely to receive wild cards. Some will also hopefully come through the qualifiers.”

Buzzing to get started

Dave Courteen, the managing director of The Shrewsbury Club, added: “We love hosting these tournaments and there’s always a real buzz around the club throughout the week.

“It’s a pleasure to see the quality of tennis played and it’s an opportunity for local tennis fans to gaze into their crystal ball and predict who might emerge as really big names in years to come.

“We are delighted that the tournaments are always so well supported and court side stands will be in place for the final few days to allow spectators to get closer to the action.”

Local school children from both primary and secondary schools will also have the chance to experience a professional tennis tournament by being invited to watch the action and pick up a racket themselves by taking part in fun tournaments at The Shrewsbury Club next Thursday and Friday.