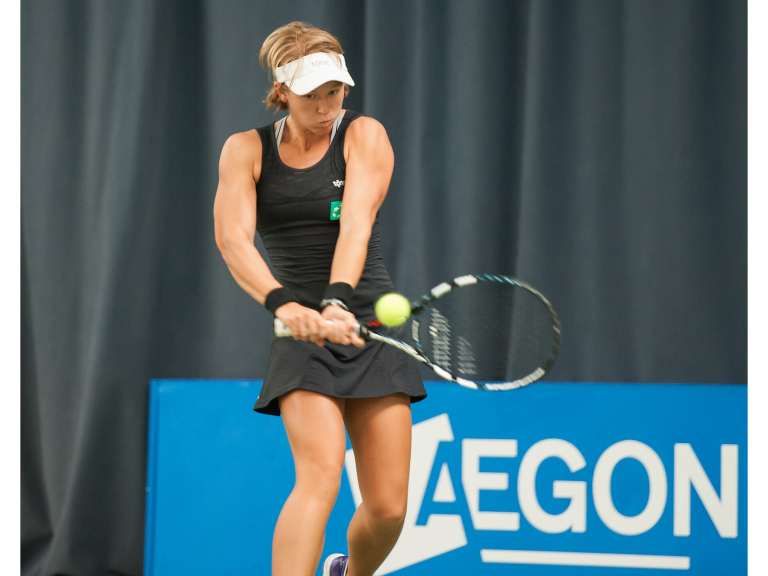 The $25,000 Aegon GB Pro-Series tournament at The Shrewsbury Club has now reached the semi-final stage, but there is no place in the last four for No 1 seed Cagla Buyukakcay after she bowed out in straight sets to An-Sophie Mestach.

The Turkish player, ranked 144 in the world, had no answer to the impressive Belgian who won through 6-1, 6-4 to set up an intriguing semi-final clash against in-form German teenager Carina Witthoeft today.

Mestach, whose current world ranking is 168 and is seeded seven for this week's high profile tournament at the Sundorne Road venue, won a $25K event in Georgia earlier this month and has picked up where she left off in Shrewsbury.

Witthoeft, her last four opponent in the second game on court today, is also in fine form and, having won the last two tournaments she's entered, remained on course to make it a hat-trick of successive titles by sweeping aside Richel Hogenkamp of the Netherlands 7-5, 6-3.

"I'm in good form but every match is different and every match is tough so you have to win every single match," said the German, who has rocketed up to 132 in the world rankings. "I'm very happy now that I can play in the semis again."

But Witthoeft, who is enjoying her first visit to Shrewsbury, insisted the tournament is wide open given the quality of the last four.

"We all have good rankings and we are all close," she added. "Everybody has to try their best and to play the best tennis to win.

"It's nice here. I like the club, I like the surface, the people are nice, so I'm enjoying my time here."

Dodin continues to be the week's surprise package having emerged from the qualifiers and maintained her excellent run with a 6-4, 6-3 victory over Switzerland's Viktoria Golubic, more than 300 places higher in the world rankings.

Today's semi-finals start at 11.30am and admission is free.

Enjoying the action will be Michael Downey, the chief executive of the LTA, who is spending the day in Shropshire.

He has a number of engagements in the county and will watch some of the tennis at The Shrewsbury Club before returning this evening to hold a question and answer session during a sporting dinner featuring guest speaker John Inverdale, the BBC television sports presenter.