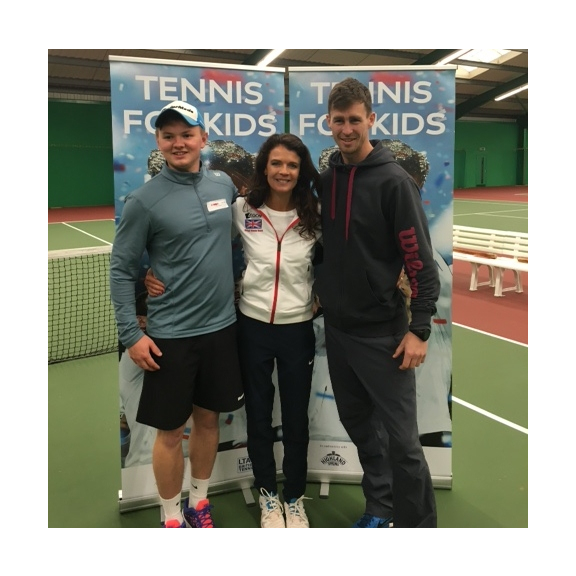 Shropshire tennis coaches are at the forefront of an exciting new LTA initiative aimed at inspiring 10,000 children across the UK to pick up a racket for the first time.

The LTA has launched Tennis for Kids - their biggest ever grassroots initiative - in partnership with Highland Spring, following the historic success of Team GB winning the Davis Cup in Belgium last November.

Hundreds of Shropshire children will be able to take advantage of six weeks of free Davis Cup lessons, with youngsters who complete the course also receiving a free racket.

As the courses are designed for children taking up tennis, the exercises focus on core skills such as agility, balance and co-ordination. Beyond the practical side of the sport, the sessions will also be teaching children how to be a valuable member of a team and how to work with a partner – all in a fun and relaxed environment.

Nigel Hunter, the Director of Tennis for Tennis Shropshire, said: "I've been coaching for 15 years and this is definitely the most exciting thing that British tennis has launched. The buzz around the tennis coaching community has been massive - and Leon Smith and the Davis Cup team have really got behind it.

"This is all part of the Davis Cup legacy. The plan is to have 1,000 coaches who are trained to deliver six weeks of Davis Cup lessons to children free of charge and if they attend four of the six sessions they will be presented with a Davis Cup-branded racket.

"It's for children in the mini-red age group from five to eight and within Shropshire 18 coaches applied to be part of the team across the country.

"Some of the coaches went to Loughborough for a coaching session with Leon Smith, but most of them went to Wrexham recently for a training session with former British No 1 Annabel Croft."

The Shrewsbury Club and other Shropshire tennis clubs

The Shropshire courses are launched next week at Baschurch Tennis Club, Shifnal Tennis Club and Bridgnorth Tennis Club, which are offering six-week coaching programmes for youngsters.

Market Drayton Tennis Club's course will get under way on May 13 and Shrewsbury Lawn Tennis Club's a day later while a number of venues will be introducing children to tennis, perhaps for the first time, throughout June and July.

The Shrewsbury Club will be offering five different weekly coaching slots on various days of the week from June 8 while Wem Tennis Club, Whitchurch's Hollies Tennis Club, Ludlow Castle Tennis Club and Boughey Gardens in Newport will also be throwing open its doors to inspire a new generation.

Nigel added: "All people have to do is search for Tennis for Kids on the internet, put their post code in and it will come up with the nearest course available for them to sign kids up to.

"There's been a massive demand already since Annabel launched the initiative nationally, so we've already filled quite a lot of places. It is on a first come first served basis.

"Some courses are filling up but if your local course is full please add your name to the waiting list as more courses will be announced soon and the clubs will generally contact players on the waiting lists with an alternative offer."

The Shropshire clubs where the tennis programmes are managed by inspire2coach such as The Shrewsbury Club, Boughey Gardens, Ludlow Castle Tennis Club, Hollies Tennis Club and Wem Tennis Club will be offering free coaching for the rest of the summer throughout July and August once the initial six-week blocks end.

The other participating clubs are also coming up with incentives to encourage youngsters to keep playing.

To find your local club taking part in the Tennis for Kids initative and to book a place, visit the website.