Promising youngsters from The Shrewsbury Club teamed up to star at a top national tennis event and are now rated as one of the top four teams in their age group in the country. 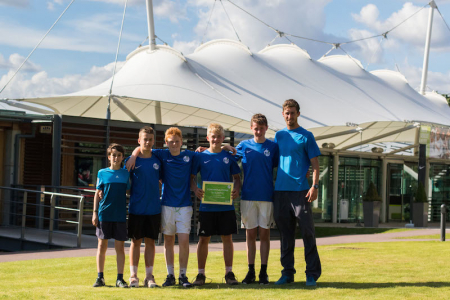 The club's 14 and under boys team took part in the Aegon Premier National Finals held at the National Tennis Centre at Roehampton in London.

The team had played in regional qualifiers since April, winning five matches to qualify for the finals, where they lined up alongside USN Bolton Arena, Westside Lawn Tennis Club from Surrey and West Hants Lawn Tennis Club, the three others teams to have won through from their regions.

Number one seeds USN Bolton Arena were the local team's first round opponents, a match which ended with Bolton victorious 10-2. That meant The Shrewsbury Club youngsters faced a play-off for third or fourth place the following day and they were just edged out 7-6 by Westside LTC after a particularly strong showing in the doubles.

Simon Haddleton, director of tennis at The Shrewsbury Club, said: "The boys played really well and it means they are the fourth best team in their age group in the country, which is an outstanding achievement.

"It was a fantastic weekend and the boys battled hard against some high quality opponents."