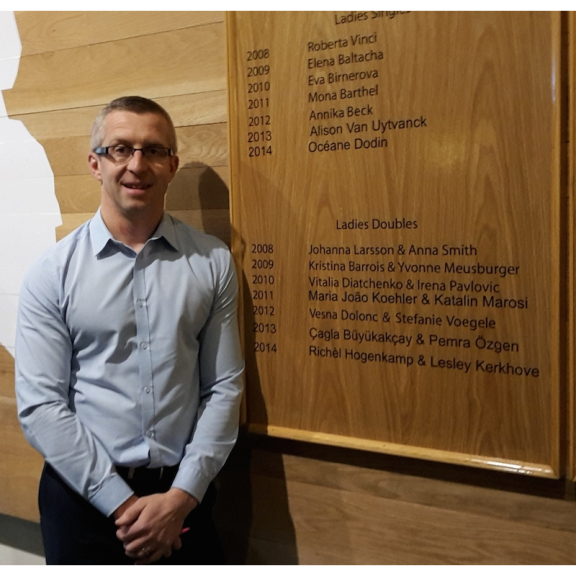 Final preparations are being made ahead of the exciting return to Shrewsbury of professional women's tennis in the Aegon GB Pro-Series tournament - with organisers hoping big crowds will support the event at The Shrewsbury Club.

A strong field of up and coming tennis stars from around Europe have entered the ITF tournament, led by defending champion Oceane Dodin, 19, the French prospect who has rocketed up the world rankings and been as high as 116 since her victory in Shrewsbury last year.

Admission will be free throughout the week with local tennis fans set to be served up a feast of top quality action.

Players will start to arrive in the town to sign in for the prestigious $25,000 event at The Shrewsbury Club on Saturday before qualifying begins on Sunday.

Round one of the main draw starts next Tuesday morning, with the draw - which will be conducted by Shropshire celebrity chef Marcus Bean - taking place at a civic reception at the Shropshire Food Enterprise Centre at Battlefield in Shrewsbury on Monday night.

The singles final, which will be watched by special guest Judy Murray, a top tennis coach and mother of British stars Andy and Jamie, will be held on Saturday, November 21.

"We know that Shrewsbury and Shropshire tennis fans respond well to these tournaments," said Alvin Ward, manager of The Shrewsbury Club. "The final of the men's event here in March was one of the best attended Aegon finals around the UK at any prize money level and we're really proud of that fact.

"There were so many spectactors, more than 400, that it was actually a job to get everyone sat down, so we've now increased our tiered seating for the advanced stages of the tournament and there will be better seating to ensure we can comfortably seat crowds of that size.

"We're looking forward to big crowds coming along throughout the week to enjoy some great tennis."

Mr Ward stressed excitement is starting to build as the start of the tournament draws closer, with Monday's civic reception always a highlight at the start of Aegon week.

He said: "It's a great way of showing how the town, the town council and local businesses get behind the tournament and make this event happen.

"The tournament might be held at The Shrewsbury Club but we rely on a huge amount of support from a number of different businesses like Budgen Motors and Berrys, our two lead sponsors, who really support us.

"It's a really expensive event to put on so we need the town to get behind it and the civic reception showcases the support we get from Shropshire Council and Shrewsbury Town Council to put on the event.

"It makes the players and LTA officials feel welcome. It's just something else to ensure that the players go away from Shrewsbury talking about what a great tournament it is and means more and more are keen to enter the following year.

"We know the tournaments brings business to the town through obvious ways in terms of accommodation, restaurants and pubs, but it also showcases what a fantastic town Shrewsbury is and we should be really proud of showing it off."

Mr Ward added he was delighted that celebrity chef Marcus Bean, a member at The Shrewsbury Club, would be involved in this year's draw.

He said: "We're pleased Marcus is coming along while a young up and coming chef, a student at Shrewsbury College - who run the excellent Origins restaurant - will help Marcus draw out the first round ties for the main draw of the singles competition."